How bad could it be?

I found myself reviewing the text on my page DIY Plumbing Project.
I was reviewing it because there are no photos on it and having photos on the pages is good for being found on Google. Thinking about what photos I might want to place on the page led me to remember a job I recently had.

I was called to alter some of the plumbing in a little food mart that was attached to a gas station. They had run to the limit on some old plumbing permits that were outstanding. In order to close out the permits they were going to have to pass an inspection. The permits were so old that they predated the current lease and the current lease holder was stuck with the problem.

There was a fiberglass double laundry sink on metal legs serving for a wash sink in a room that had been a restroom. The old sink drain was too high and the pair of drains from the double sink were joined to a sagging p-trap that emptied into a 1-1/2" ABS pipe. That ABS pipe dropped off at a steep angle, past a 1-1/2" PVC supply 90 degree ell and then past a Wye-branch clean-out. It then was inserted into the open toilet flange where the restroom toilet had once been connected. There was a lot of room remaining in the 4" drain at the toilet flange that was not being taken up by the 1-7/8" OD of the sink drain pipe. There was "hardware cloth" shoved into the old toilet drain to keep anything other than sewer gas from emerging from it. There were of course rat traps set with bait under the double sink. I can't tell you how many rat traps I have seen over the years, they certainly wake one up.

Once I had finished connecting the sink drain to the properly vented drain in the wall I sealed the old toilet flange with a compression plug made of galvanized steel. I carried the scrap pipe away as usual and it went out with the next load of refuse. Before it did though I took a bunch of photos. Here are a few of them. 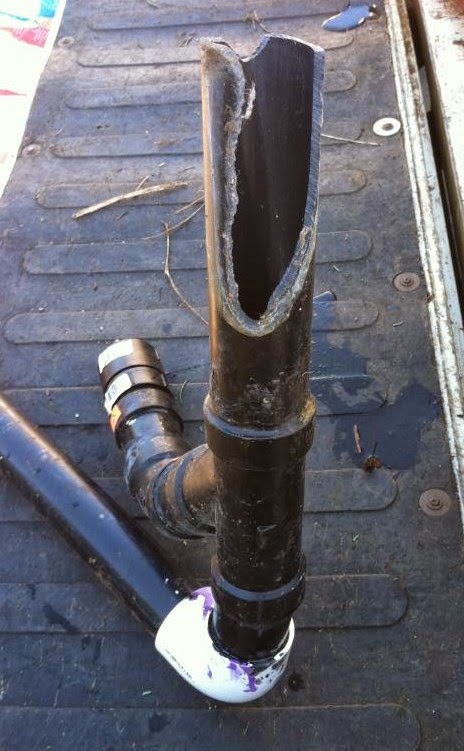 Sorry I didn't get before photos of this heinous arrangement.
Here is the section of piping I pulled out of the toilet flange, it is now upside down.


This section of pipe with the clean out must have been salvaged from another use. It certainly was not going to clog in the 4" toilet drain. 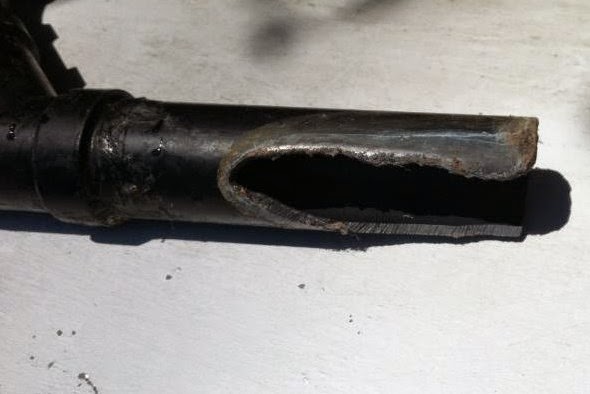 Those marks on the pipe are teeth marks, but not from any kind of a saw.

I think they made it out of the drain and into the room. Once they became a problem the pipe was shoved farther down and the hardware cloth was added, along with the rat traps.


Posted by plumbinggeek at 4:41 PM