I service and restore "Fuller Ball Valves". If you don't know what those are, let me explain. All pre-washerless faucets have washers, that seems logical enough but it isn't true. There are also fuller ball faucets.

With a washer style faucet, also known as a compression faucet, the washer at the end of the stem presses to the brass seat of the valve body to form a seal against the water pressure. This system is a bit high maintenance as the washer needs to be in good condition to hold the seal. 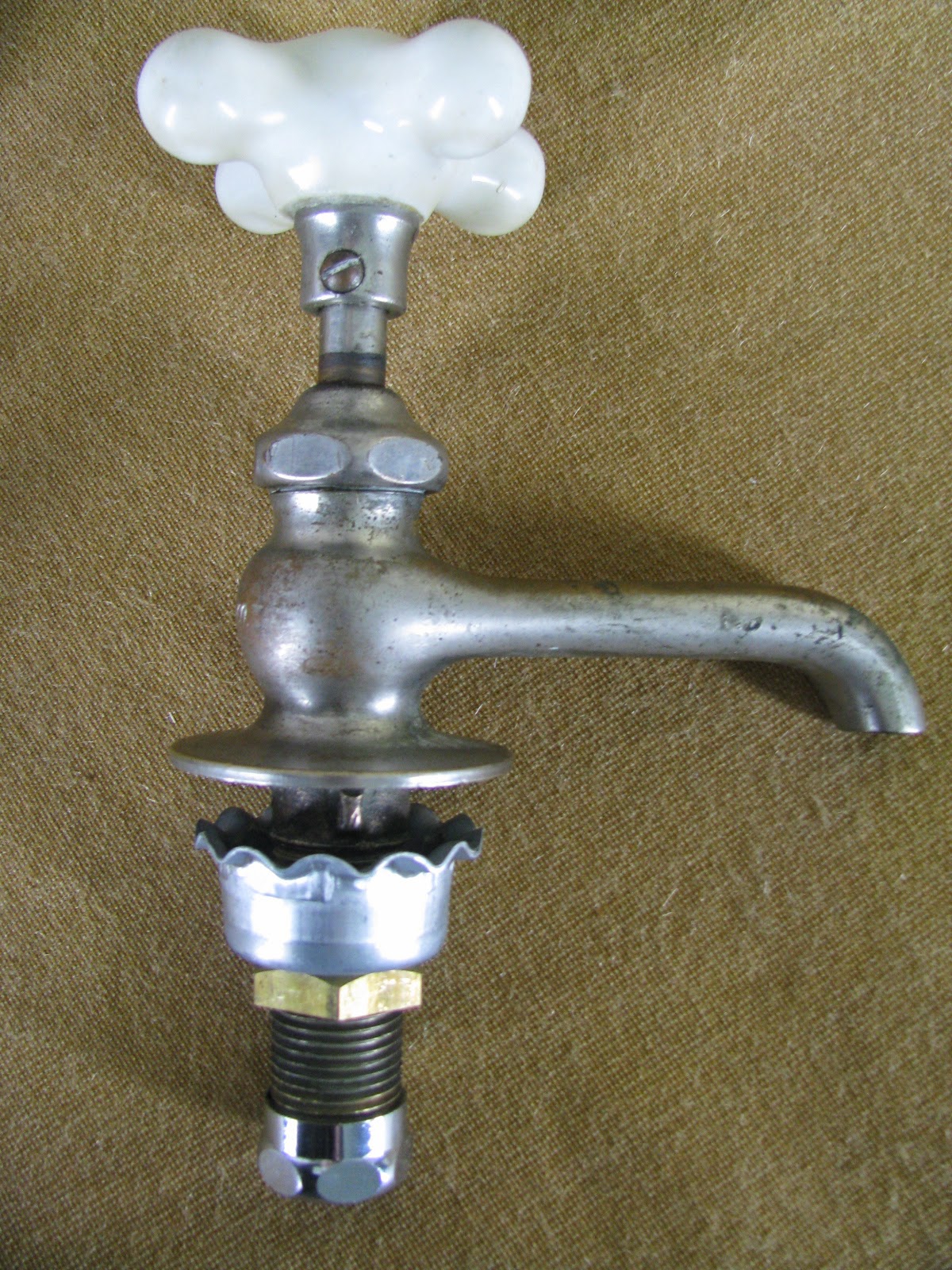 I prefer hard washers, about 80 on the "Durometer Harness Scale". They hold their shape, especially in hot water, and seem to last longer. The greatest flaw with using them is that particles of rust, lime, water heater dip tube, or bits of pipe metal that may pass through the faucet may be forced into the surface of the washer if the particle becomes trapped between the washer and the brass at the critical moment when the faucet is being closed. When this occurs the washer can be dented by the particle. The particle may also become embedded into the hard rubber where it may stay until the washer is replaced. These occurrences are manifested as drips or leaks from the faucet spout. 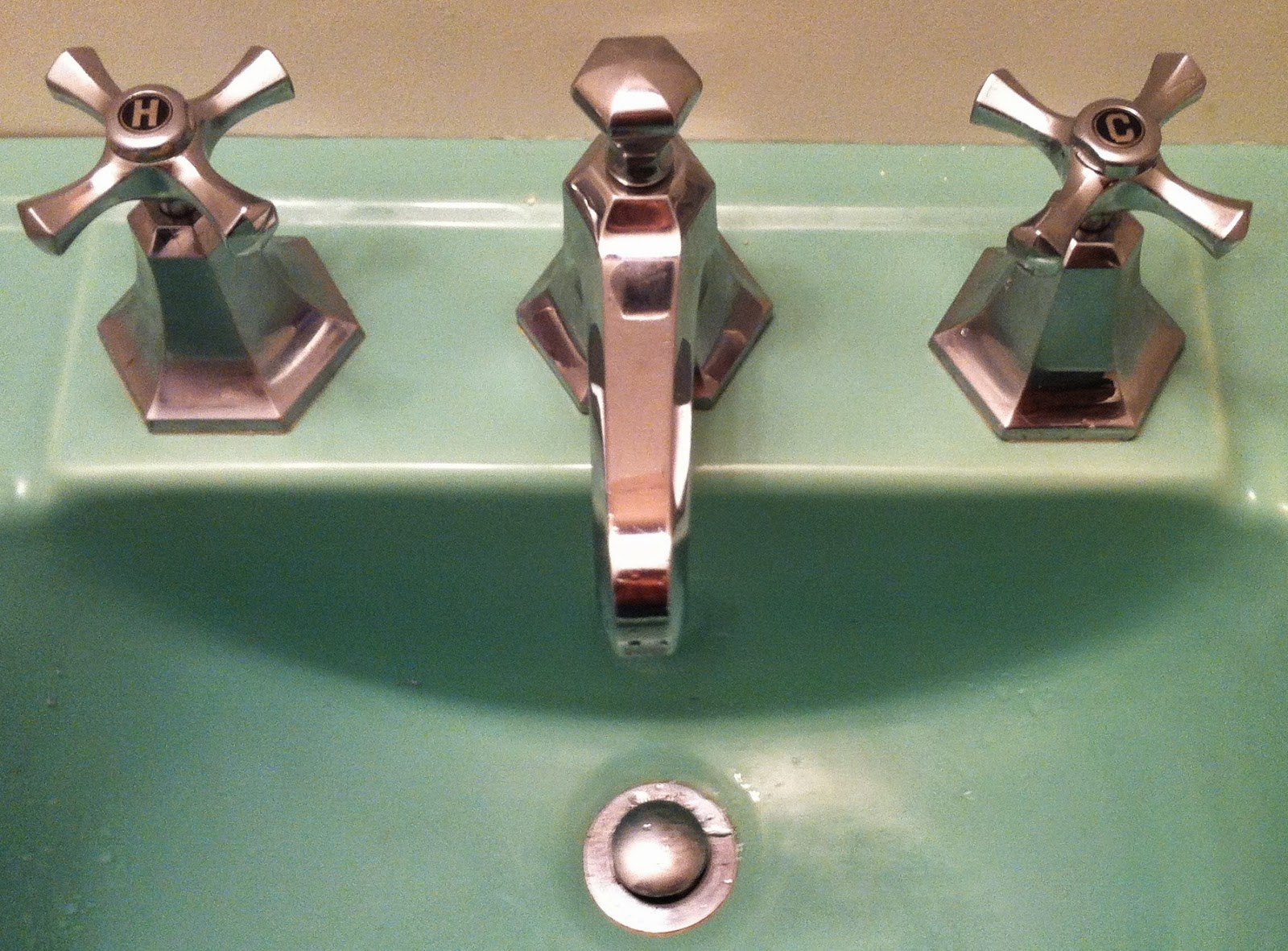 Softer washers, 40 to 60 on the scale, have problems of their own. They can become soft enough in hot water to be cut by the seat when a very firm hand is used to turn the faucet off. They also deform more readily and in general do not last very long. On the positive side they don't tend to hold indentation marks or foreign objects.


The higher the water pressure the more perfect the point of washer/seat inter phase needs to be to prevent dripping. So we tend to employ washerless faucets in the modern home. In the vintage home, where older style faucets are part of the charm, part of the interior architecture, we become good at changing faucet washers. 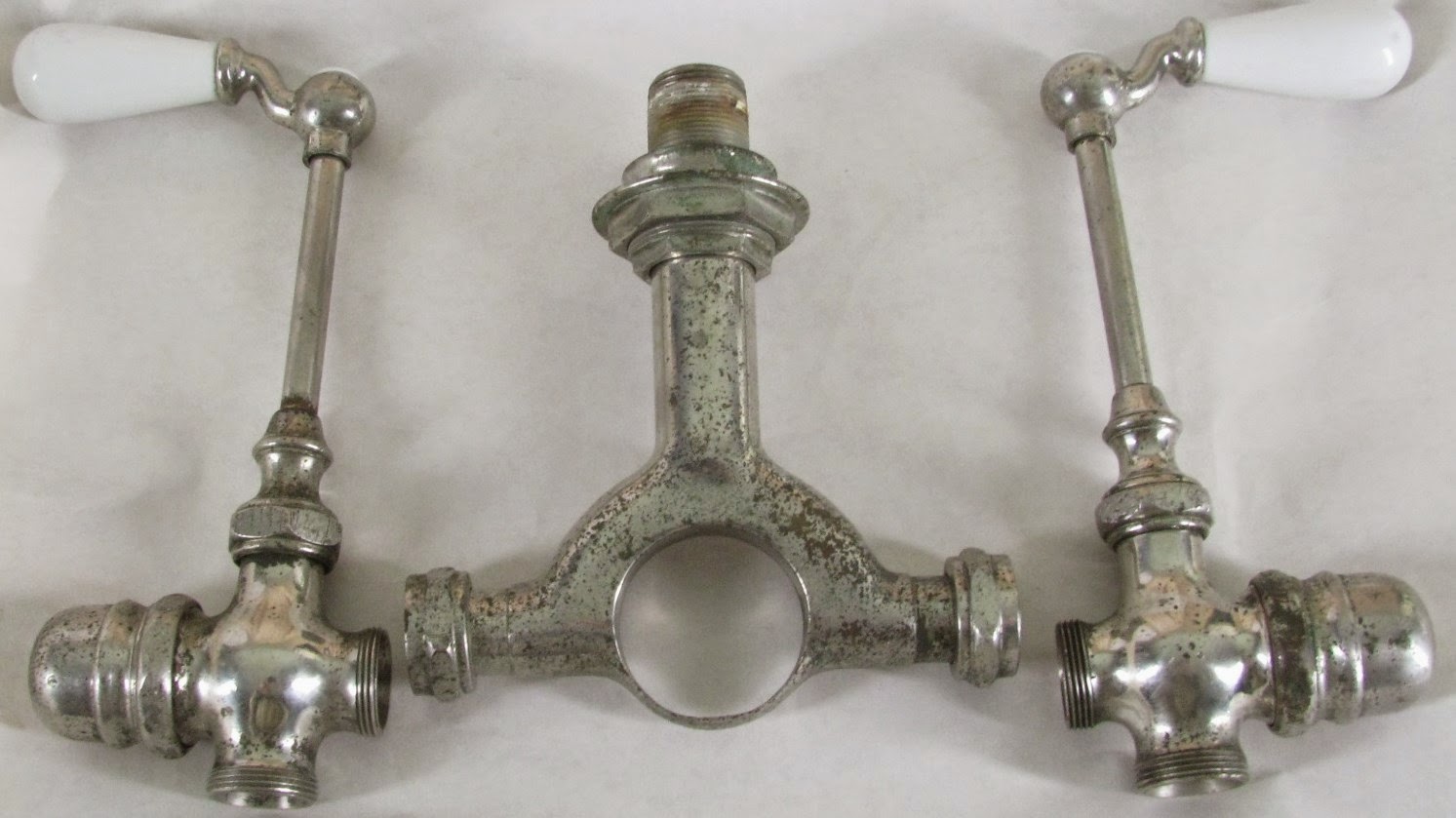 Note the position of these handles, these faucet valves are both in their off position. I know this because the handles are flaring outward. This design feature makes using the valving  intuitive. 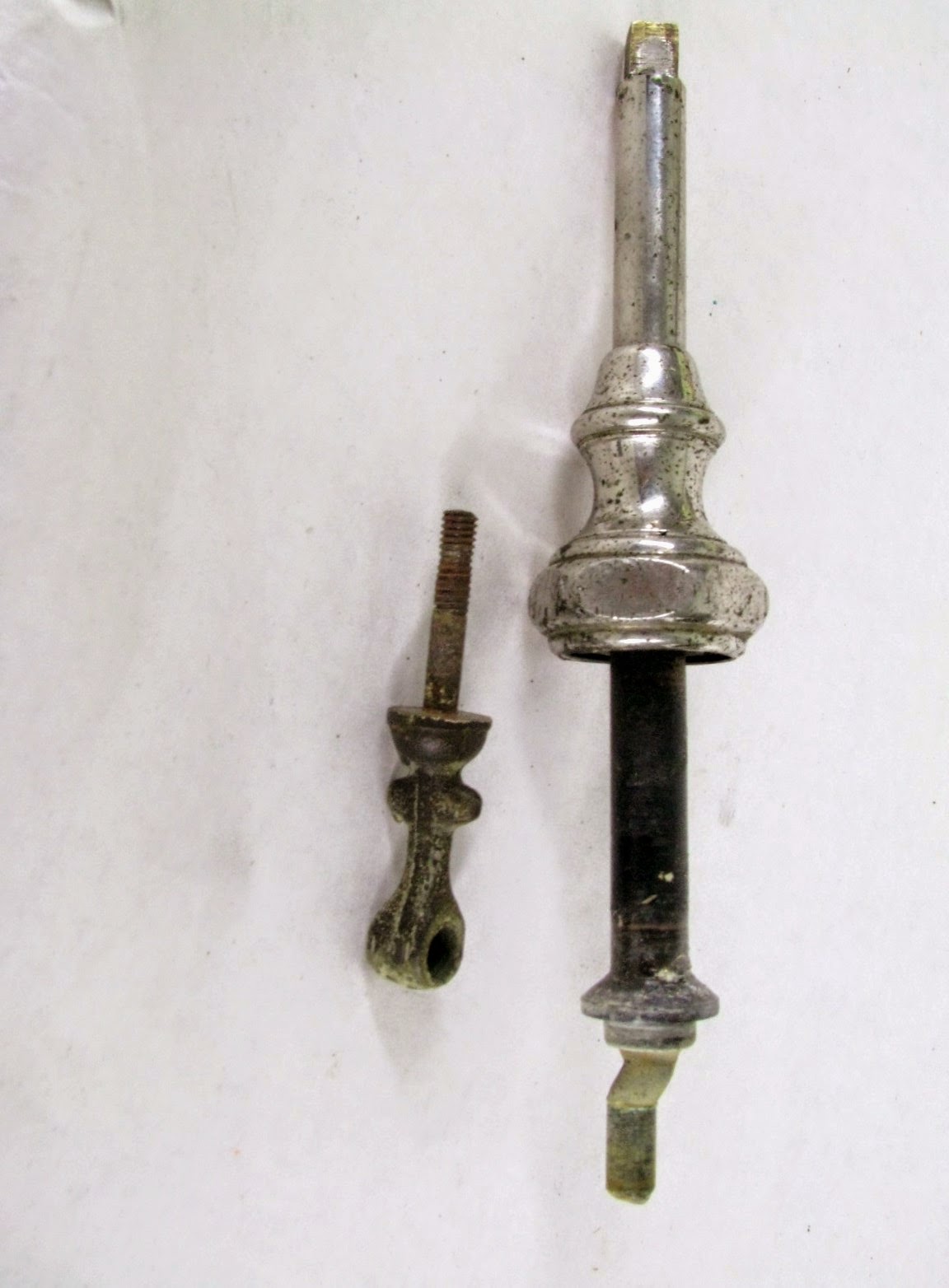 The primary stem works like a crankshaft. All it does is rotate. Because the action is not up and down like a compression stem the packing seal is not challenged by a stem that travels through it. The stem packing therefore rarely leaks.   The secondary stem works like a piston rod. The fuller ball is fitted to the threaded part of it's shaft. Rotating the primary stem draws the ball to and away from the seat.
Note, the handle mount is set to agree with the aspect of the eccentric offset. 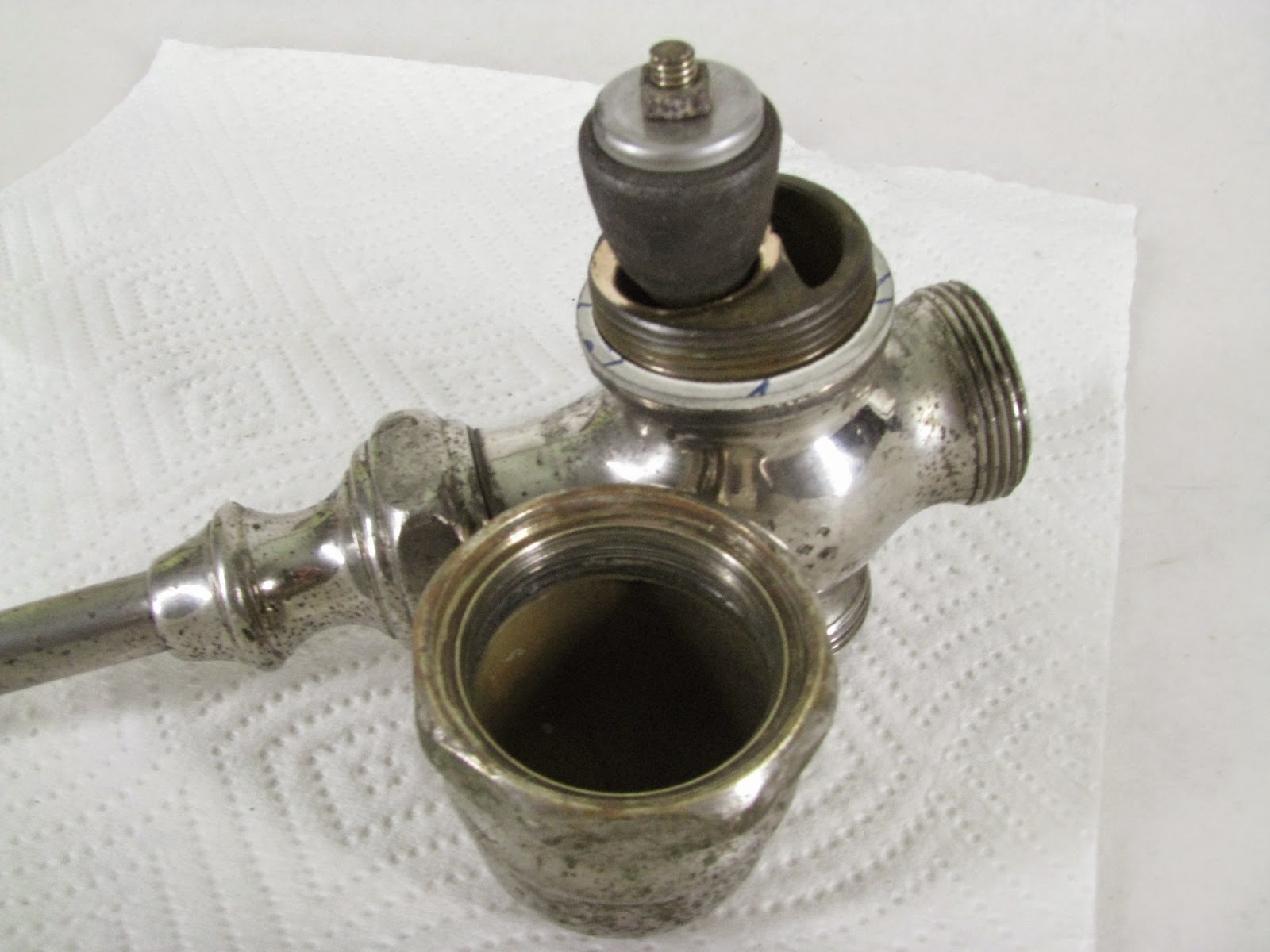 The water enters this valve at the port on the far right. It passes into the chamber that the cap in the foreground seals, this is the house pressure side of the valve. It enters the chamber via the moon shaped port to the right of the cone shaped fuller ball. When the secondary stem is pushed away from the center the ball moves off of the seat and allows water to flow toward the spout.


When I receive fuller ball valves to repair the balls are usually rotted and shriveled almost beyond recognition. The seats are pitted from decades of soaking. The stems are worn from improper adjustment resulting in pressure on the brass. After disassembling and cleaning all parts I fashion a new fuller ball from my own stock product. I use 60 durometer  neoprene for this, the rubber must compress so that the brass does not experience wear. I hone the surface of the seat. Unlike compression valve seats the fuller ball seat is milled into the thickest part of the brass, there is plenty of room to go down to bright metal. Also unlike a compression valves the brass stem can not grind into the seat so the seat is never gouged. A smooth seat and a new ball, when tuned properly, make an impeccable seal that could last for decades. This is especially true of my work because I use a neoprene that unlike older rubber products will not rot in the presence of water. When my valve is tuned the handle will rotate freely through a 360 degree rotation. The merest resistance may be felt at the closing of the valve, the water is doing the work, not the brass. One is not able to pull the handle down hard as with compression style valves. Because of this the brass endures on and on with almost zero wear.

Now I come to the impetus for writing this blog post. I have twice heard this comment regarding fuller ball style valves.

I simply cannot agree with this. The fuller ball must first and always be in good condition, just as a bibb washer must. The seat must be smooth and unobstructed, Just as a compression valves seat must. The water pressure though is my friend with a fuller ball, the greater the pressure the more likely they are to "thunk" a bit but the seal at the seat is not challenged by it, it is helped. On the other hand higher water pressure against a bibb washer turns even the slightest irregularity into a drip.

The design of the fuller ball faucet appeals to my idea of tight, highly functional, and enduring engineering. It is not a machine that wears itself out. It does not respond differently to different hands and so cannot be brutalized or handled too lightly. My practical experience with them is that they work, then they continue to work, on and on.

If you have visited my home page at plumbing-geek.com, you have seen a picture of a fuller ball valve. That's right, that awesome Crane Pedestal  lavatory is fuller ball. I did that restoration project about twenty years ago and used to ask the client if it was still working OK. I got tired of asking. Even though I had a fraction of the understanding of vintage plumbing I now have, though I fabricated the fuller balls in a way I would not even consider now, it continues to work properly.

I am going to close with a few new views of the fixture, though they are early cell shots and not that good. then I will add some other shots of fuller ball faucets. Thanks for visiting.
Brian, the plumbing geek. 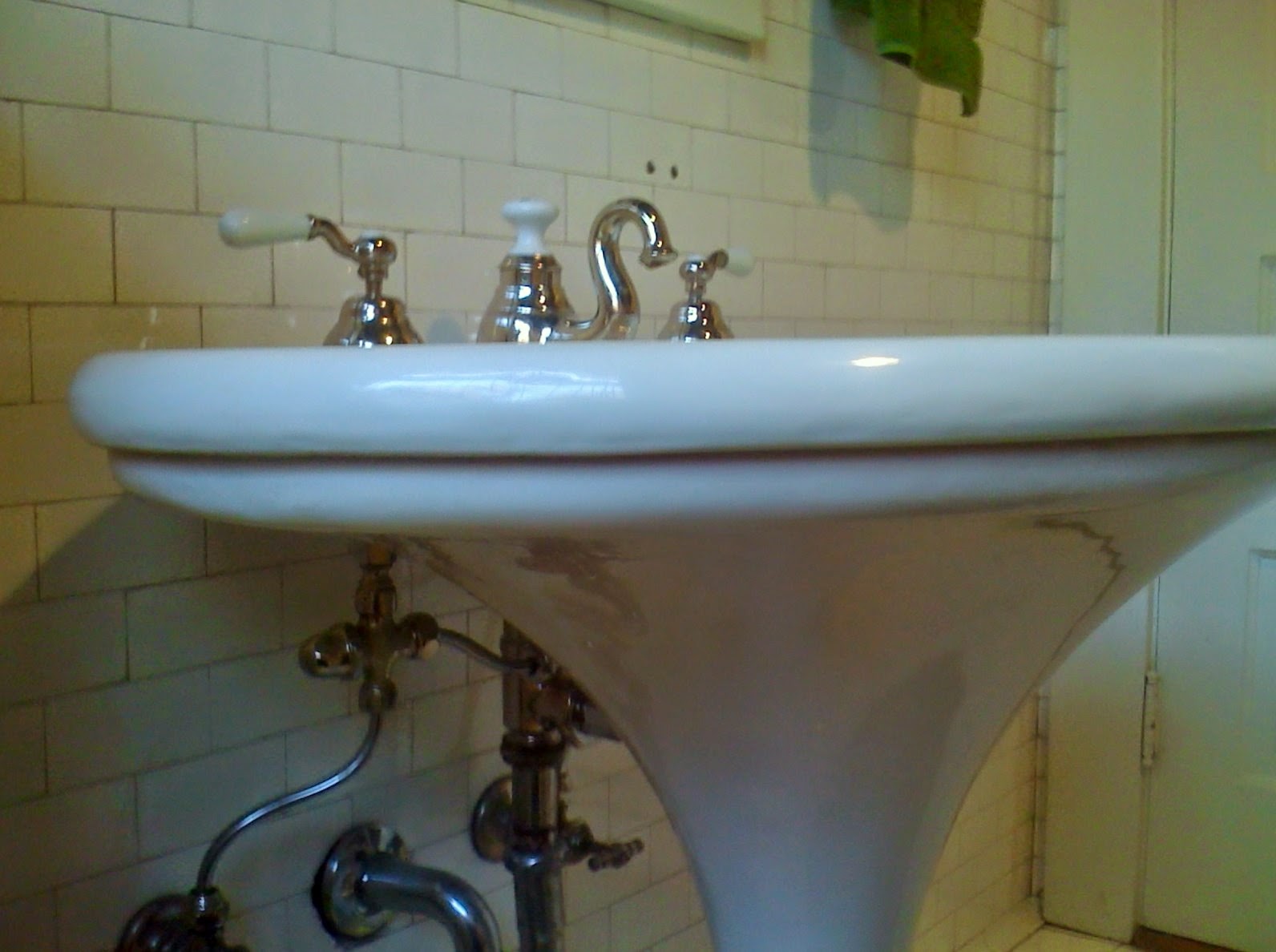 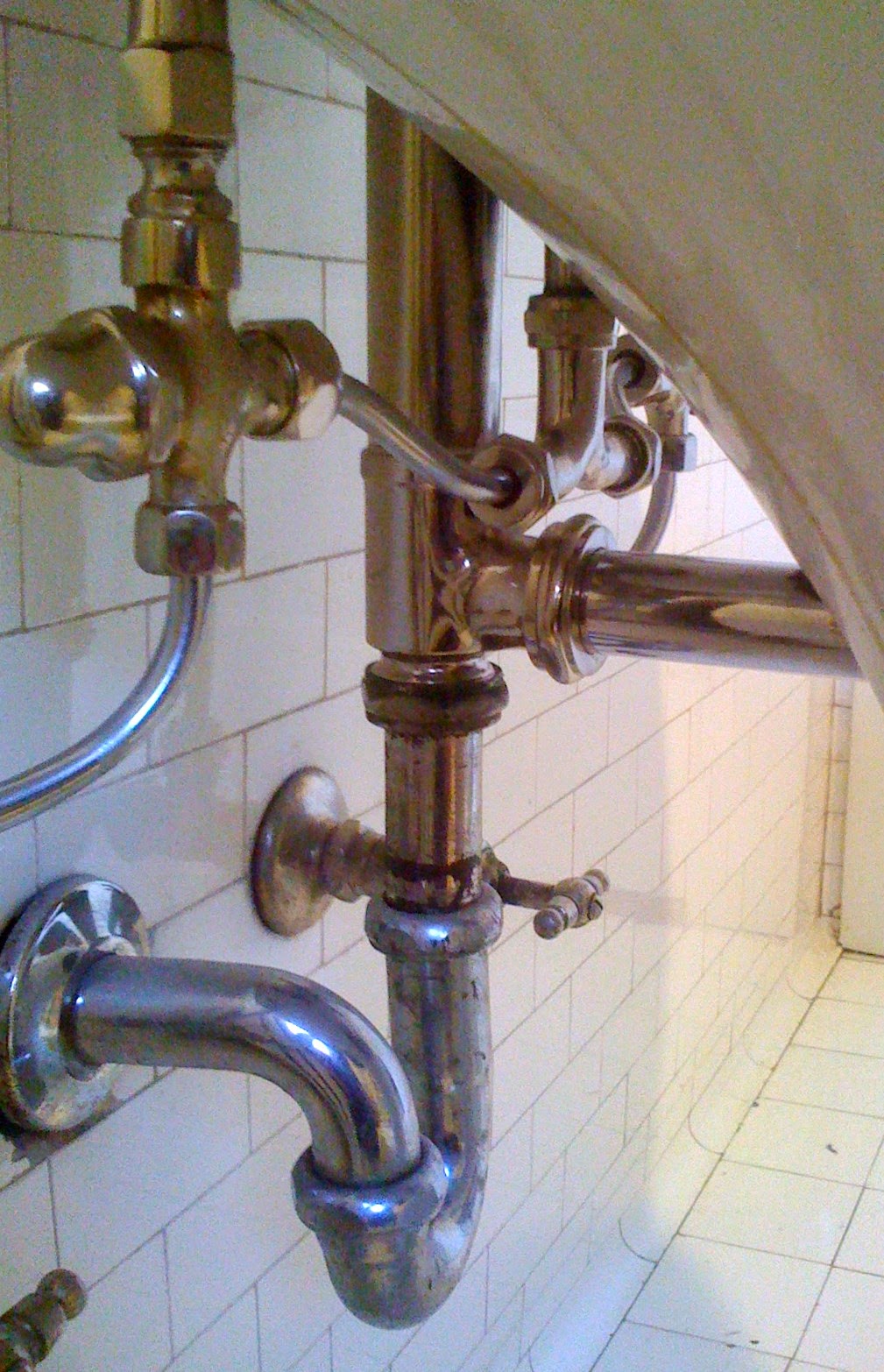 If you could have seen the pliers scars that were filled to make it look this good. 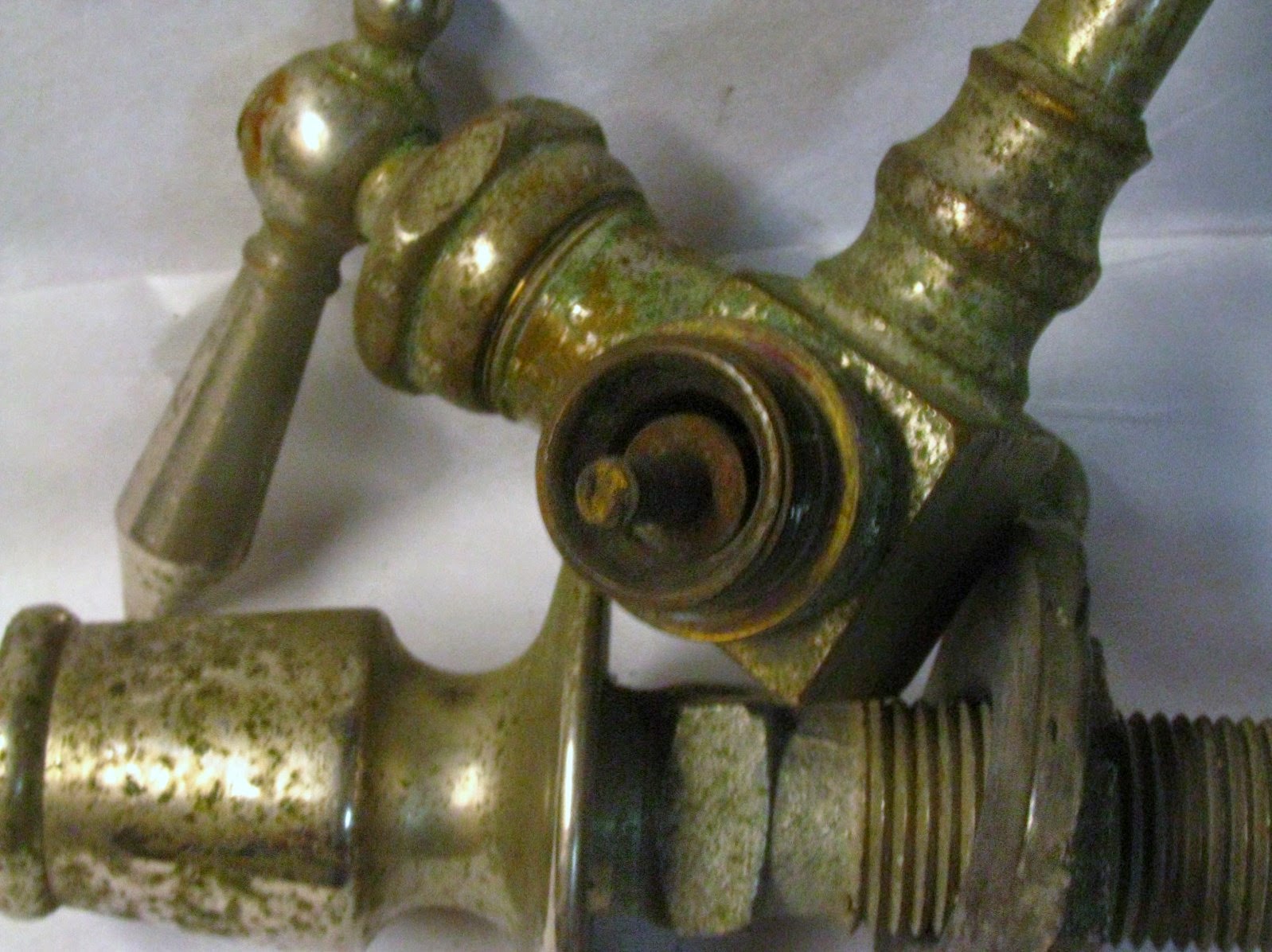 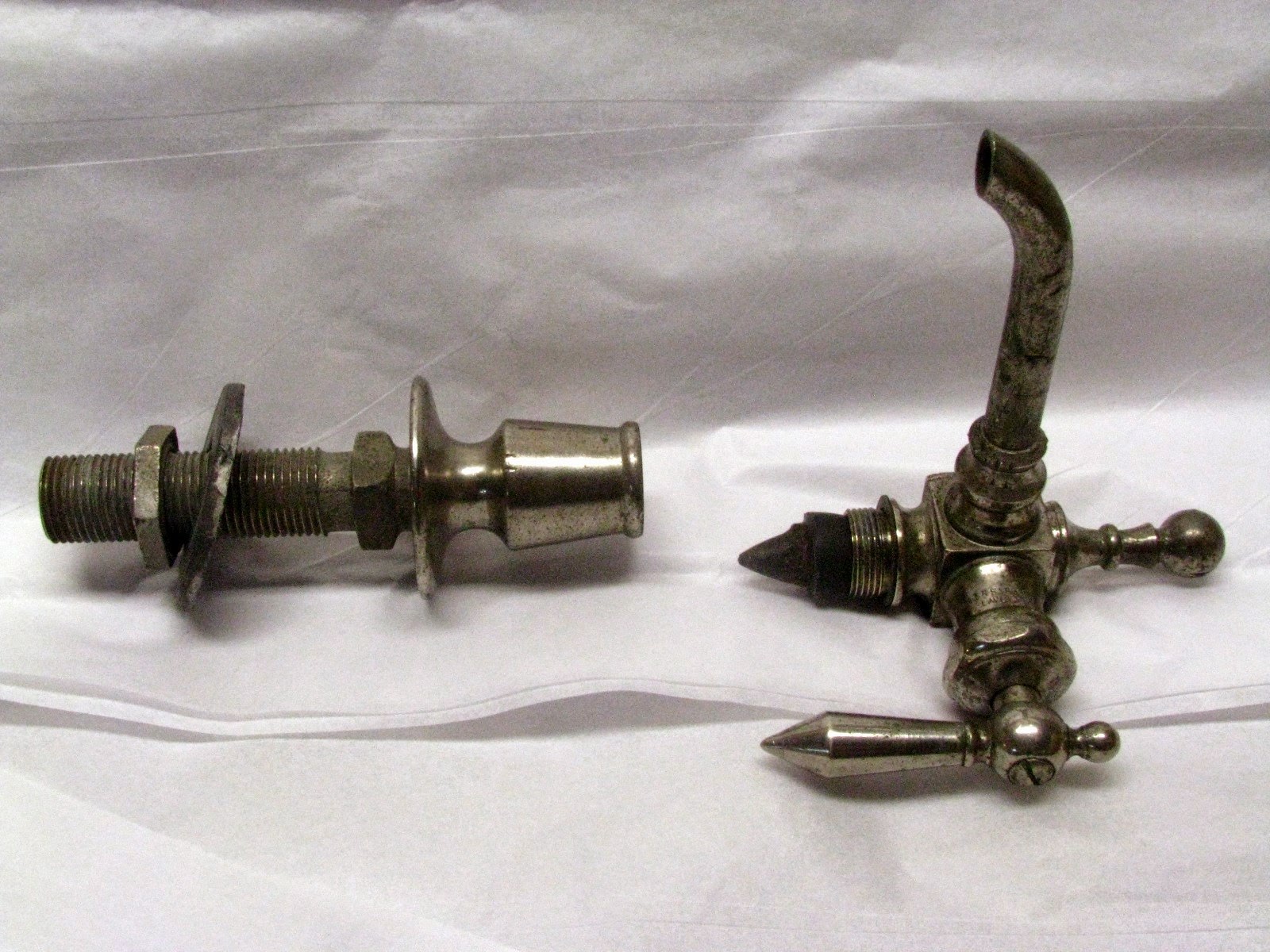 Fitted with new secondary stem, new ball, and a clever conical nut that splits the water flow to avoid the possibility of erosion, not that that happens. 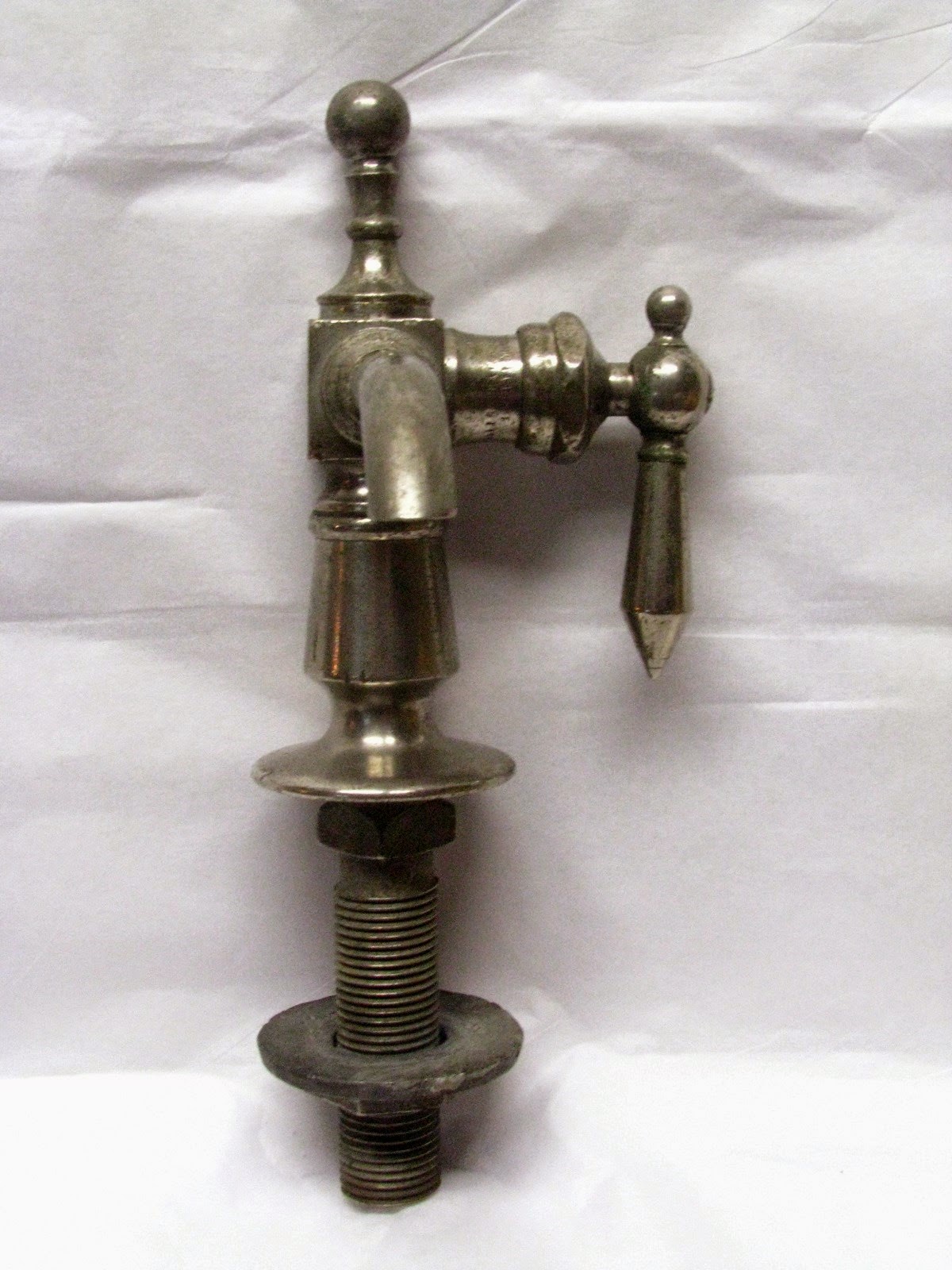 Ready to go to work. 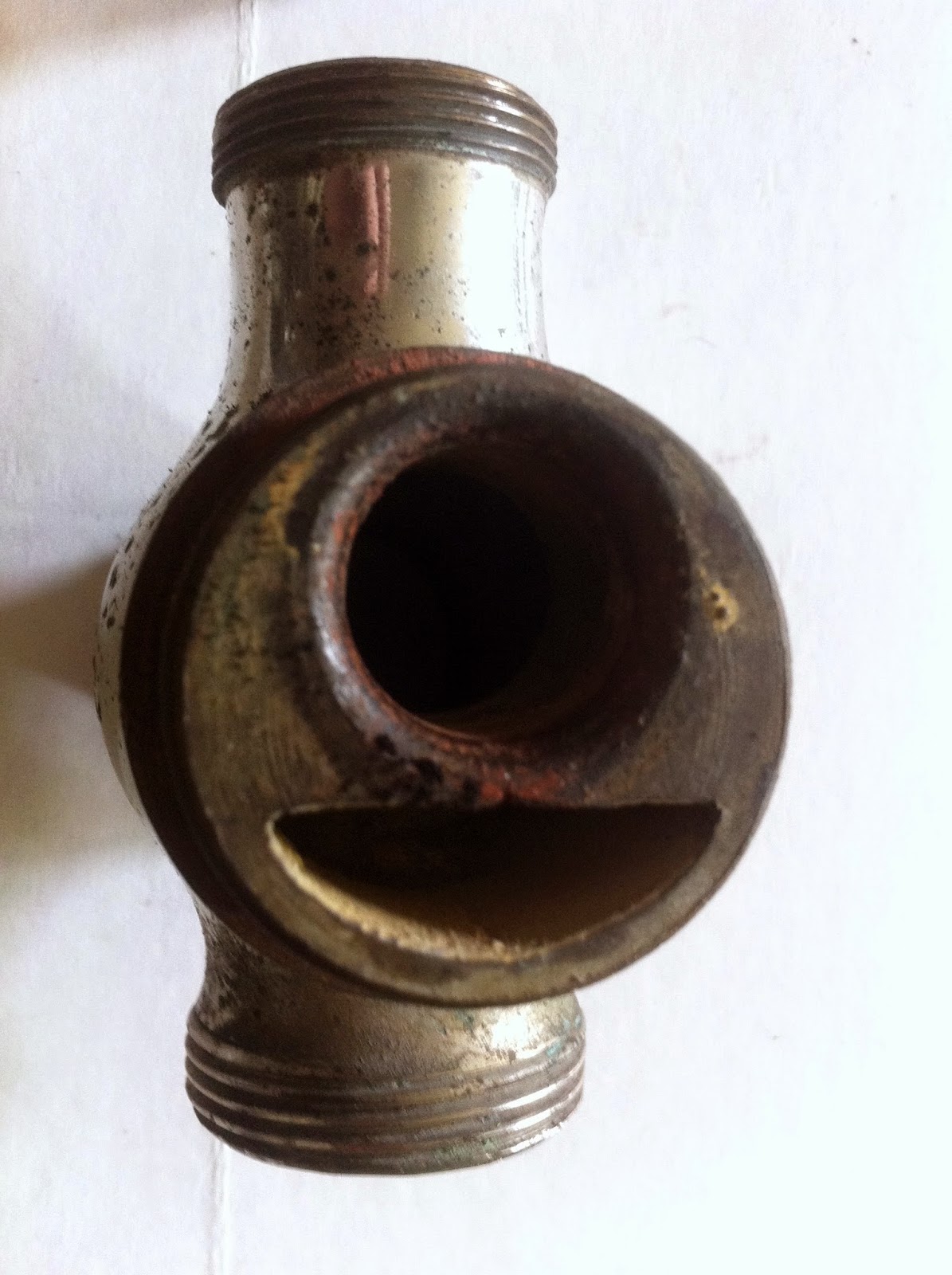 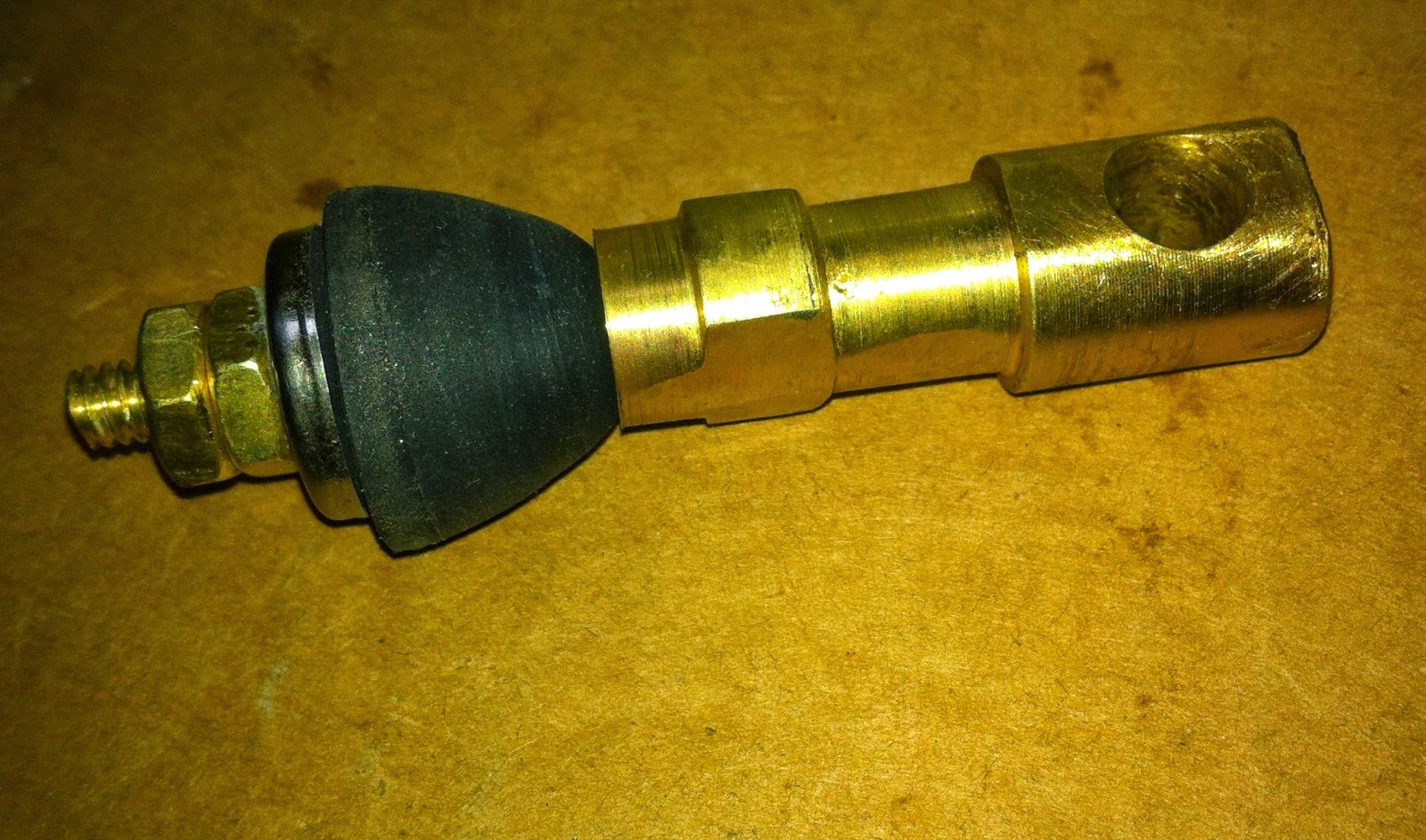 New secondary stem I turned on my lathe. 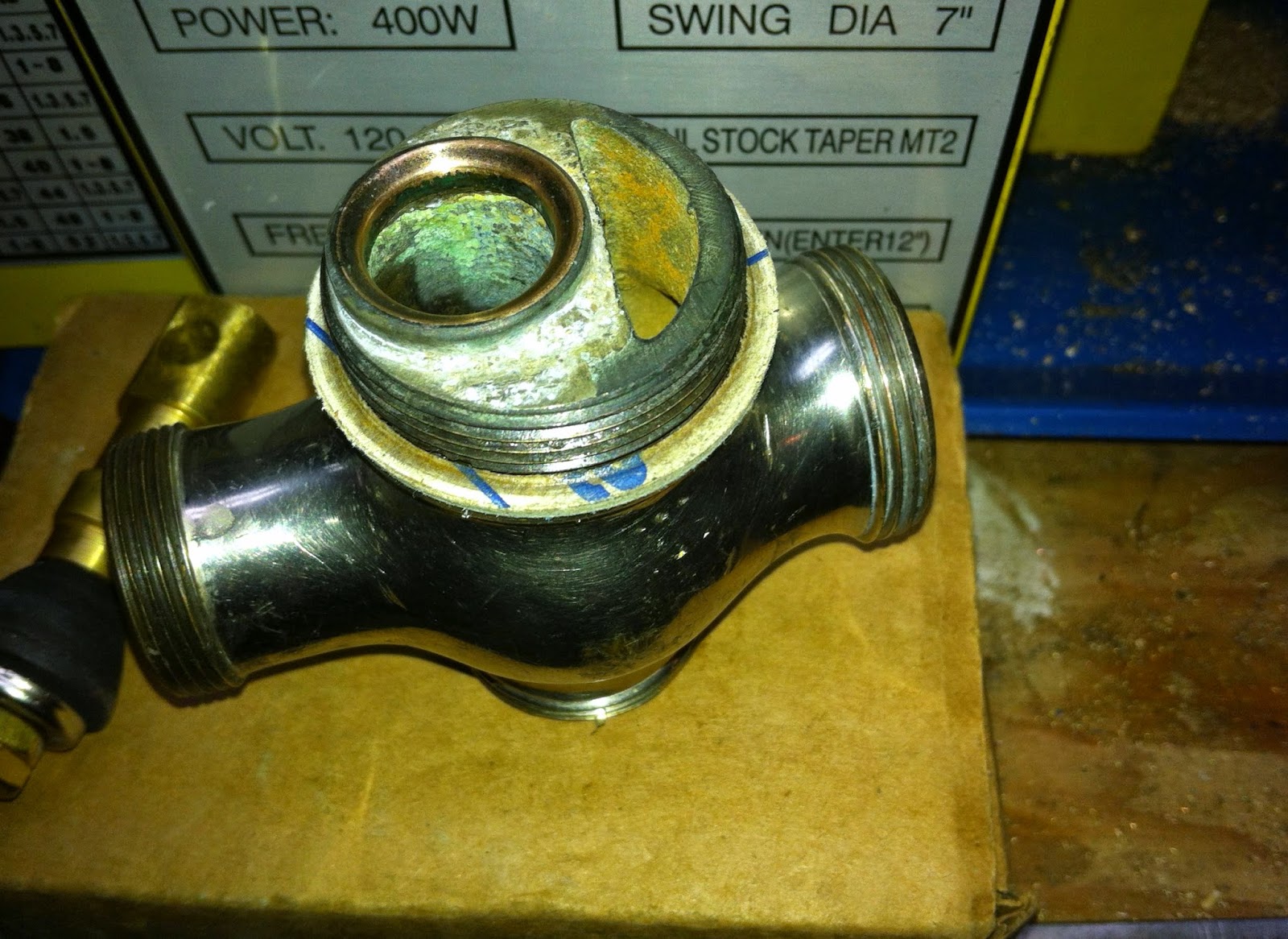 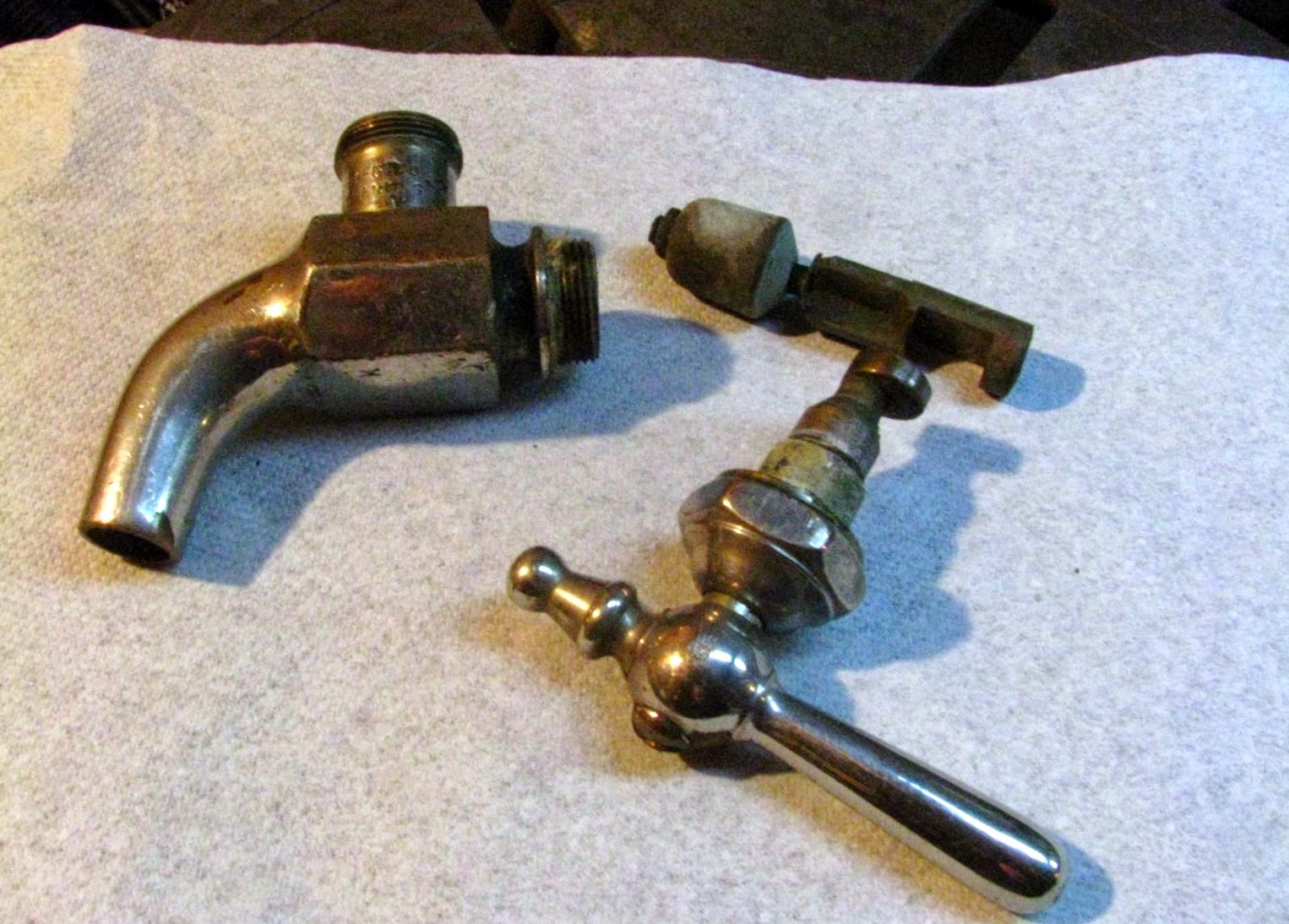 This one is a little different, but it works fine.
Good luck replacing either stem. 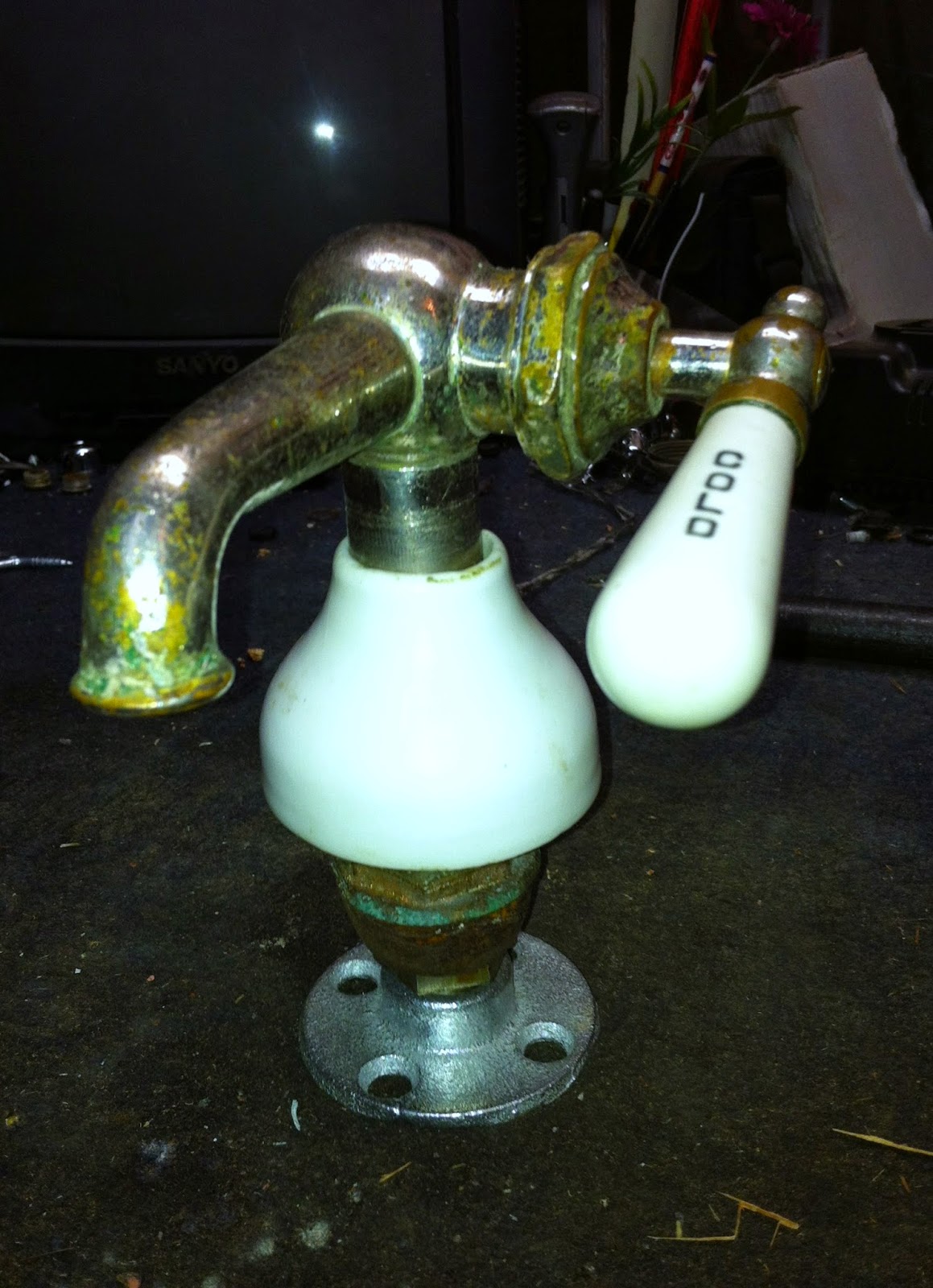 I have a lot of fuller ball taps, from Victorian on. 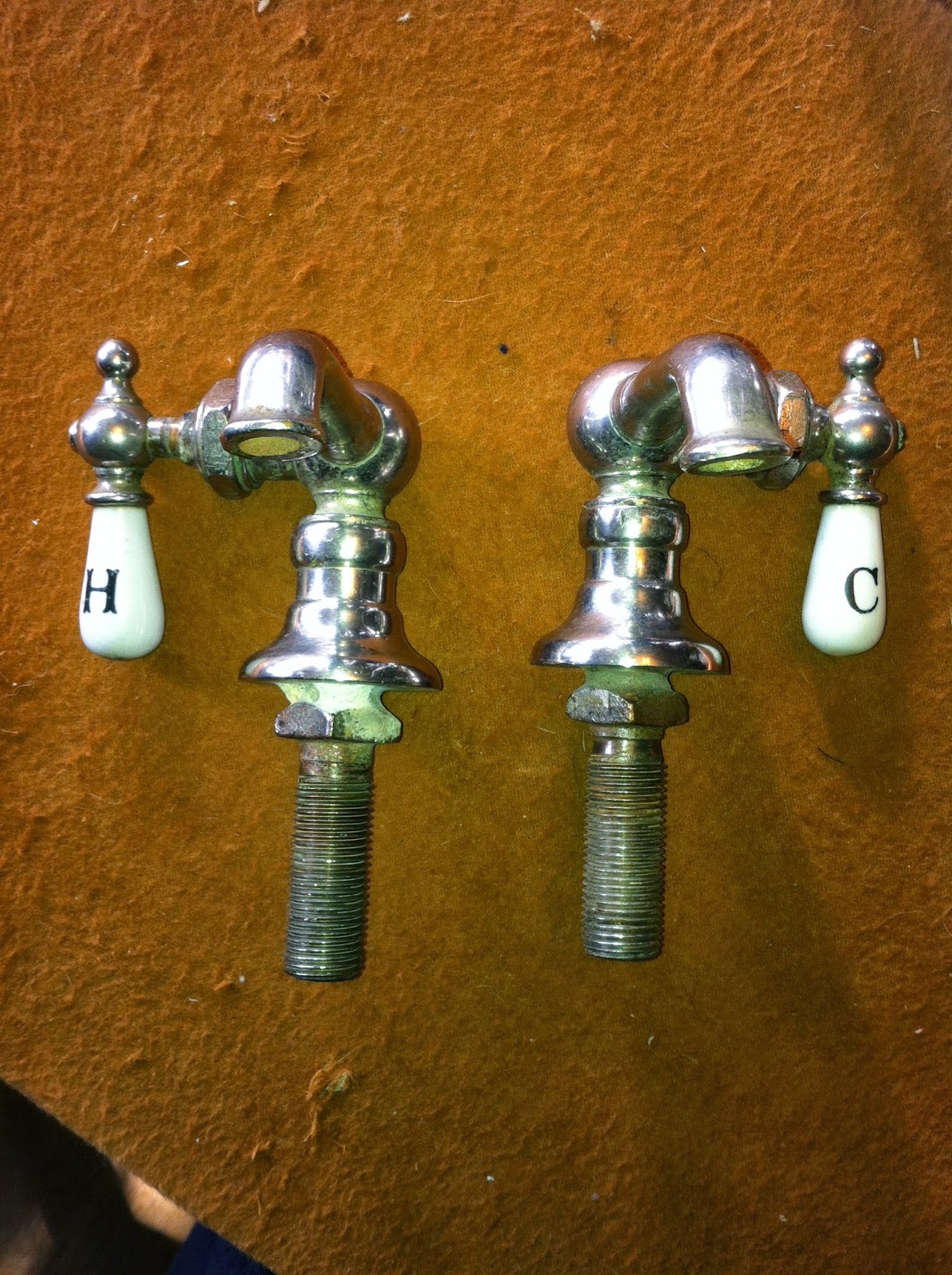 Matched pairs as well.
Posted by plumbinggeek at 4:37 PM