Most of the faucets that are sent to me for restoration must first be removed from large heavy fixtures. They have been set on those fixtures for many decades and it is usually no easy task to separate them. One of the most difficult parts to remove is the drain strainer. This is complicated further when the strainer is cast in an ornate pattern that will lend itself to no known style of strainer wrench. Unfortunately, because of this problem, I sometimes receive bent or twisted ornate drain strainers along with the brassware I am to restore.

I do my very best to remedy this and sometimes have interesting results. That is a different blog post though and I will be getting to it soon.

The work I do these days is far down the road of my journeyman experience. At this point I see myself as an artisan and my work is important to me in terms that don't relate to profit. In a way it is simple problem solving and in a way it is using my tools and my skills to manipulate various materials with the goal of preserving and at times recreating what once was.

While I have the time and interest to do this work, most plumbers do not. Nor should they unless they care to, under their own momentum. One thing I do not want to do is make their task more challenging than it needs to be. I expressly want them to have success when it comes time to reinstall the fixtures I am sending back. I am always willing to consult on the reinstallation, though most plumbers don't ask for the help. I probably wouldn't either. I try to provide specifications and measurements when I think it will help. I also try to provide tools at times, especially for unusual drain strainer patterns.

For the most part the drain strainer wrenches I fashion would not successfully remove strainers frozen in place by decades. They should be strong enough to be used as installation tools though. I have made quite a few custom drain wrenches and I am getting better at taking the time to get photos along the way.

This ornate lavatory drain was made by J.L. Mott. I have seen the pattern several times on drains of basins as well as tubs. This strainer plate has suffered a bit and is no longer truly symmetrical. It is in fair condition though. When I make a tool for a strainer I try to create as many points of contact as I can. I also try to make those points of contact as far out on the radius as I can. That way the stress is shared by more than the usual two points and the points of contact have more potential torque. In this case I have created six points of contact.  I am sending two of these fixtures back and I wanted to make a tool; that would work for both.

What I envisioned for this tool was a PVC cap with a flat face. I found that I did have such a fitting and began my fabrication. The first thing I did was to lay the flat top of the cap onto the strainer face and pencil the pattern of the plate onto the flat surface of the cap. I then put the cap onto the drill press and drilled six 1/8" holes to match up with the centers of the six outlying holes in the strainer. I then drilled these holes larger in preparation for my 1/4 x 20 tap. I will often begin with smaller bits as a way of staying on center when working by eye. Once the holes were drilled and tapped I was ready for screws.

With the screws in place I mixed enough epoxy to embed the screws inside of the cap, creating a much stronger tool. At that point I covered the steel screws with shrink wrap intended for wiring, further protecting the brass from the steel. 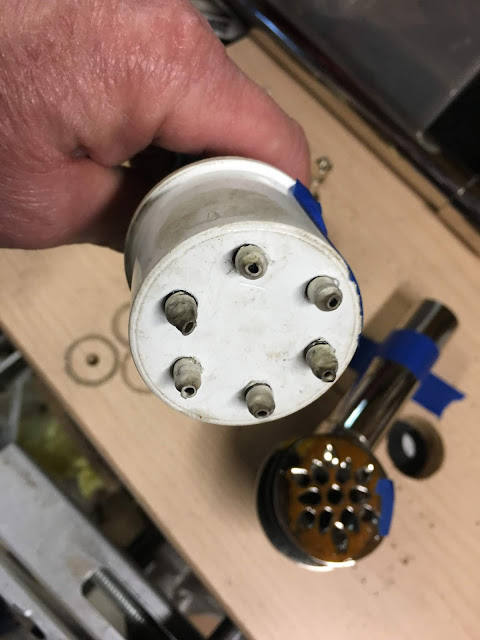 Of the three lavatory drain assemblies I received for this project one was different.
Making this tool was much simpler and I did it in my usual way. I was more conscious of getting photos of the process with this tool.


Once I have selected what I will use as the face of my tool I center it on the strainer and mark where it will protrude through. In this case the best fit was found using a 3/4" CPVC coupling. 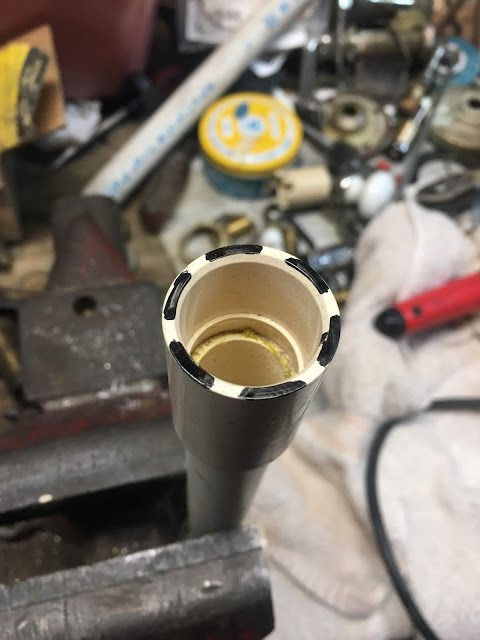 I often use a hand saw to make my cuts. This time I used a cutoff wheel and my moto tool.


The narrow sections are removed with a needle nose plier. 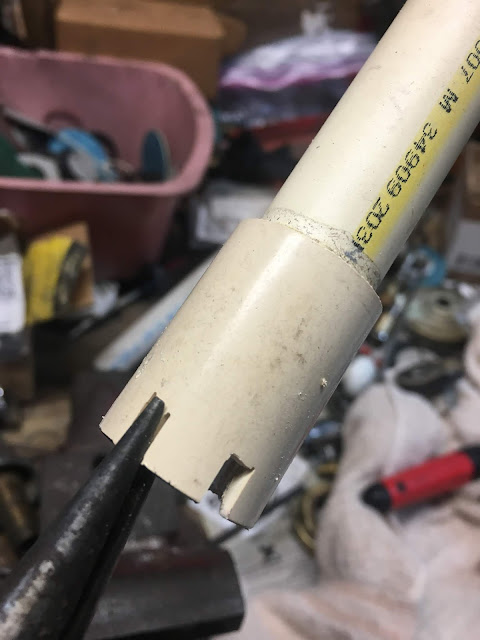 What remains are six lugs that fit into the pattern of the strainer. 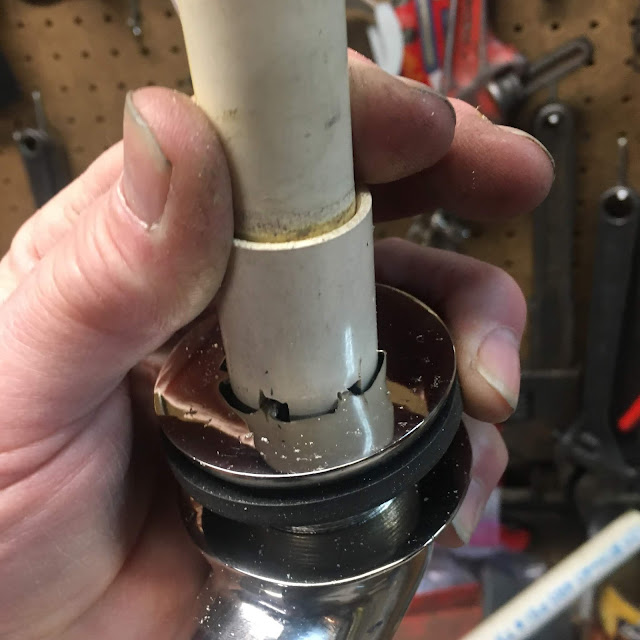 Posted by plumbinggeek at 4:46 PM No comments:

I have just completed my restoration project on a set of vintage J.L. Mott lavatory faucets. One of the challenges I had to overcome was the lack of original porcelain index buttons for the faucet handles.

J.L. Mott employed a four part index button style. The brass handle hub had a raised threaded rim that would receive a matching threaded ring. The ring would hold the porcelain index button in place. The forth part would be a disk of thin cardboard. This disk would be placed under the index button to create some friction and be a spacer.

Completing my project necessitated the provision of an index button for each handle. The problem I had was that I didn't have any original Mott buttons. I had a set of four matching buttons that were the correct size but they were too tall to allow the threaded rings to even start, much less seat in. The American Standard buttons were the proper height but they are slightly too small. Small enough to drop through the Mott retainer rings.

With the project essentially done I found myself held up by the lack of two pairs if Mott index buttons. The Standard indexes were very close, close enough to look right if I could find a way to set them firmly into place. My solution to the problem was a little tricky to actually do but it worked.

Among the many vintage repair kits I have in the shop are some assortments of brass friction washers. These are mostly intended to sit under cap gaskets in faucet stem assemblies. I do find other uses for them occasionally. I drew from one of the assortments four brass washers that were too wide to drop though the Mott index button retainer rings, but narrow enough to not inhibit the threading of the retainer onto the raised male thread of the handle hub. These rings would be epoxied onto the down facing sides of the index buttons. The tricky part was getting them properly centered and holding the indexes in place during the process.

I found that the index buttons danced around on the work surface far too much to do the careful epoxy work that was required. I have 1/8" thick crafting tape that is sticky on both sides. I cut a portion of the tape and stuck it down to the work surface. I then pealed off the protective paper from the top side of the craft foam. The double stick foam held the index buttons snugly in place and I was able to work.

I was careful to keep the epoxy off of the downward facing finished sides of the buttons. With a thin coating of epoxy on the unfinished side I was ready to set the rings into place. They had to be centered, but I was able to do this by eye. After each brass washer was in place I added a little more epoxy to the indent created by the washer on the disc of the index.

The next day I was able to assemble my final result. 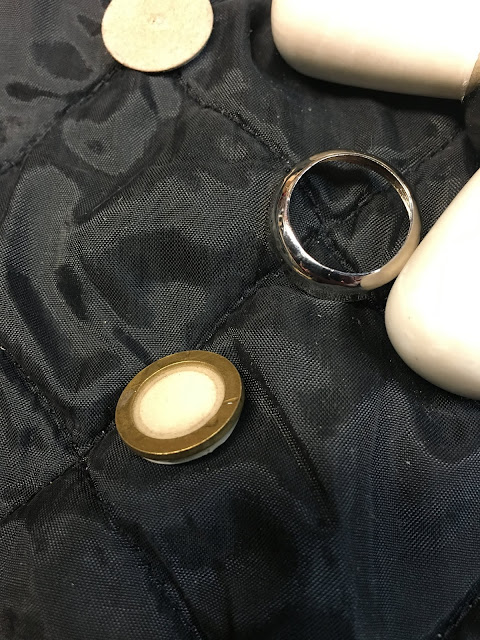 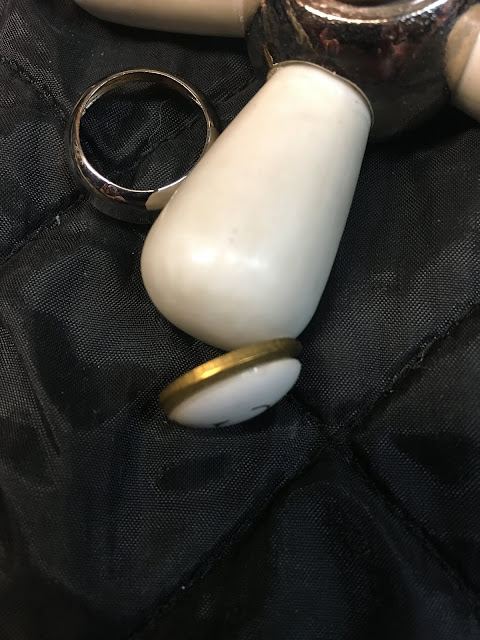 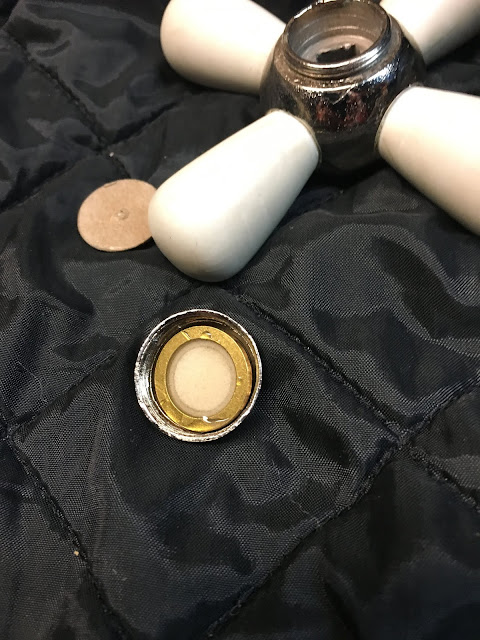 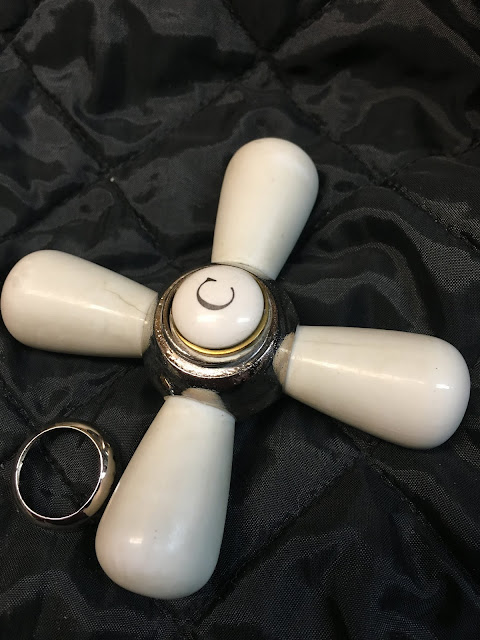 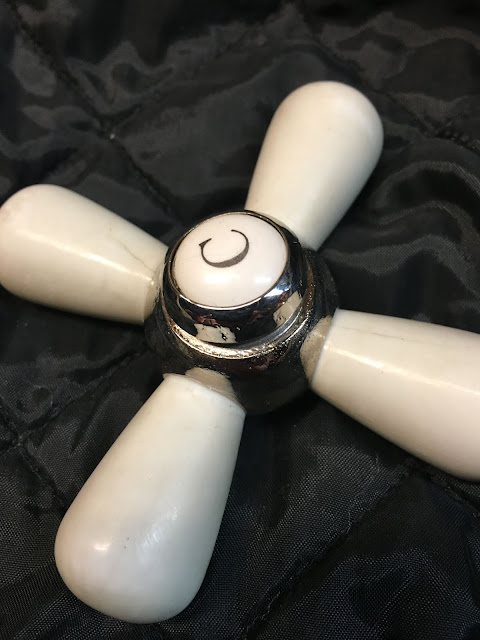 Posted by plumbinggeek at 10:53 AM No comments:

Plumbing fixture restoration certainly can be challenging. One of the most demanding aspects of it is the need to replace lost or badly damaged parts. It demands all of my skill and creative problem solving at times to simply approximate the original aesthetic appeal of beautifully designed fixtures.


This is especially true when working on L. Wolff or J.L. Mott plumbing fixtures. There is a far smaller pool of salvaged parts available for those manufacturer's products than there is for Crane, Speakman, or Standard brassware.

I have made great progress learning ways to recreate brass parts, but sourcing or recreating porcelain parts remains elusive at best.

I am just wrapping up work on a large project for a home on the other side of the country. All of the fixtures I have been sent were made by The J.L. Mott Company. Two lavatory faucets arrived without china escutcheons or china index buttons. This post is about what I eventually did to provide escutcheons for the fixtures.

I had enough of these china escutcheons in stock to really cherry pick
the lot of them. I have to say that I'm quite pleased with the result.


Posted by plumbinggeek at 8:12 PM No comments: