First do no harm

One of the things plumbers are sometimes called upon to do is remove tub drain assemblies, a waste and overflow is what it is called. The hard part of that task is to remove the drain strainer, especially if it has been in place for several decades. It is notoriously difficult to do and often the strainer is destroyed in the process. If the parts are being removed for replacement the important thing is to not damage the tub but what if the parts are being removed in order to restore them?

There are two types of modern tub drain strainers, those with a cross bar and those without a cross bar. The latter of the two has no cross bar to allow a pop-up plunger to be used, much the same way as a lavatory pop-up. These two variations have been used all the way back to the early mid-century. There are a host of tools designed to help in the removal of tub strainers and still it is not uncommon for them to be removed with a saw.

Tub drain strainers before the mid-century going back to the Victorian period can present an entirely different problem. Yes they are as frozen in place as later versions but many times there are no tools for the task of removing them. Many of them are not just old and part of assemblies that are to be restored, they are beautifully ornate as well.


Last week I was told that I will be receiving a vintage standing waste for restoration. I have seen this tub and waste and know that the strainer is vulnerable to damage when removed. It may take considerable force to unthread it from the boot below the tub. As it so happens I have a strainer here that is the same size and pattern so I decided to fabricate a removal tool. It will probably take more force than a plastic wrench will tolerate so I needed to make my tool out of steel.

I put a lot of thought into it but didn't decide upon a design until about four days go. I woke early and designed it with my eyes closed and my head on the pillow. Today I finished it, it isn't exactly what I envisioned but it's close.


Making my custom tool was a lot of work. I started with a piece of 1/4" steel plate and selected a hole saw that is slightly smaller than the strainer top. With the steel clamped to the drill press table I cut my disc from the plate.  Once I had my disc I marked it using the vintage strainer as a template. I drilled my six holes in two steps to help me stay on center, the center hole I had from the hole saw.
The target hole size was to allow 7/18ths" bolts to pass through. The heads had to be removed as the holes are too close to allow them. I selected small brass washers and threaded them to 7/16" x 20 thread per inch. They are the stops that lock the headless bolts on the forward side of the plate. I needed nuts on the other side but again the nuts wouldn't fit that closely together any more that the bolt heads would. 3/8" nuts would fit and I needed tall coupling nuts that would penetrate the ratchet socket I planned to use to turn my tool. I drilled and retapped  my coupling nuts from 3/8" x 16 to 7/16" x 20. When it all fit together the nuts made a circle of six, six sided nuts with six outside faces. A center nut bolted through the center hole holds the outside ring true and gives resistance against the force of the socket. 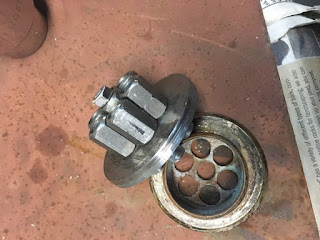 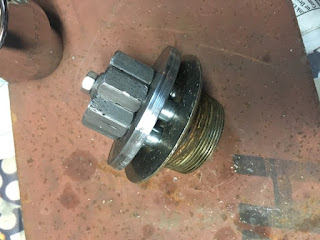 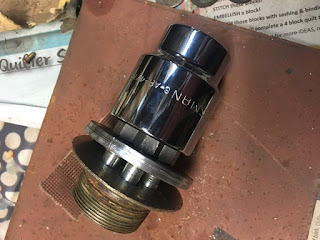 Read more »
Posted by plumbinggeek at 9:38 PM No comments: