It’s a curious thing, working with vintage fixtures. It is common to come up against the need of a part that is near impossible to acquire.  Though one gets good at sourcing and is constantly making new connections, inevitably parts must be made for some projects.

Once I have determined that fabricating a part is unavoidable there are certain decisions to make. Will I go to a machine shop and ask them to make the part for me? Will I try to make it myself with my small lathe, drill press, and hand tools? Can I make what I need by altering some preexisting part? This last direction is the way I try to go, it is faster, less expensive, and when it works establishes a way to make that same part in the future.

This blog post is about the small part I provided for a project last week, but more than that it is about my process and these small journeys of discovery.

When technologies are in flux, when ways things should and could be done are still being established, engineers tend to all go in different directions and so manufacturers tend to create products that differ widely in function and form. That was the way with plumbing fixtures in the first half of the previous century.

How many ways can one attach a handle to a stem? Center screw or set screw right? In 1925 there were also compression nut, counter nut, and no doubt a few other ways to go about it. There were just as many ways to index a handle for hot and cold as well. Standard Sanitary Company had two ways to attach their porcelain cross handles and index their handles, both involved the assembly of four or more parts and were entirely different from each other. 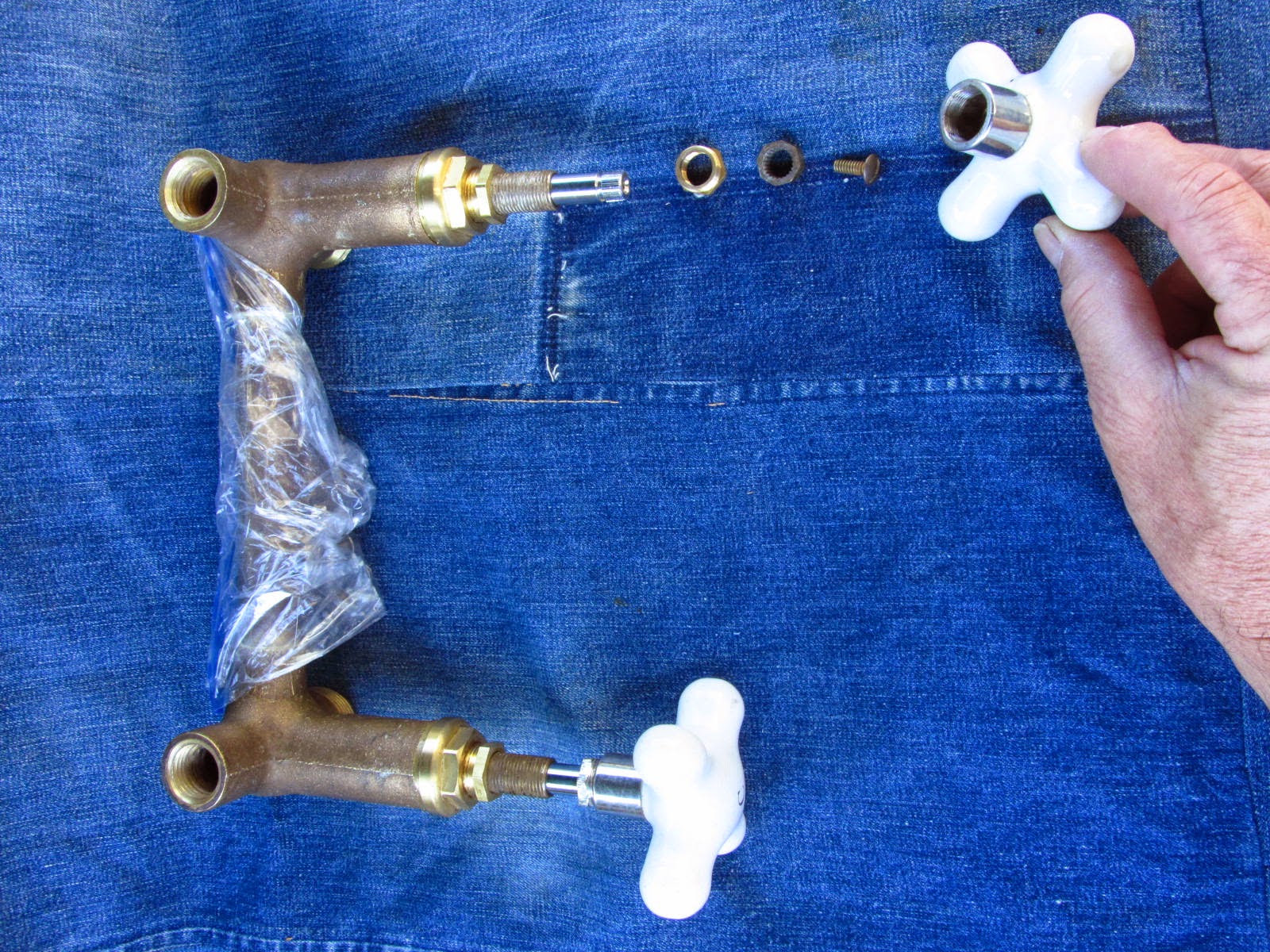 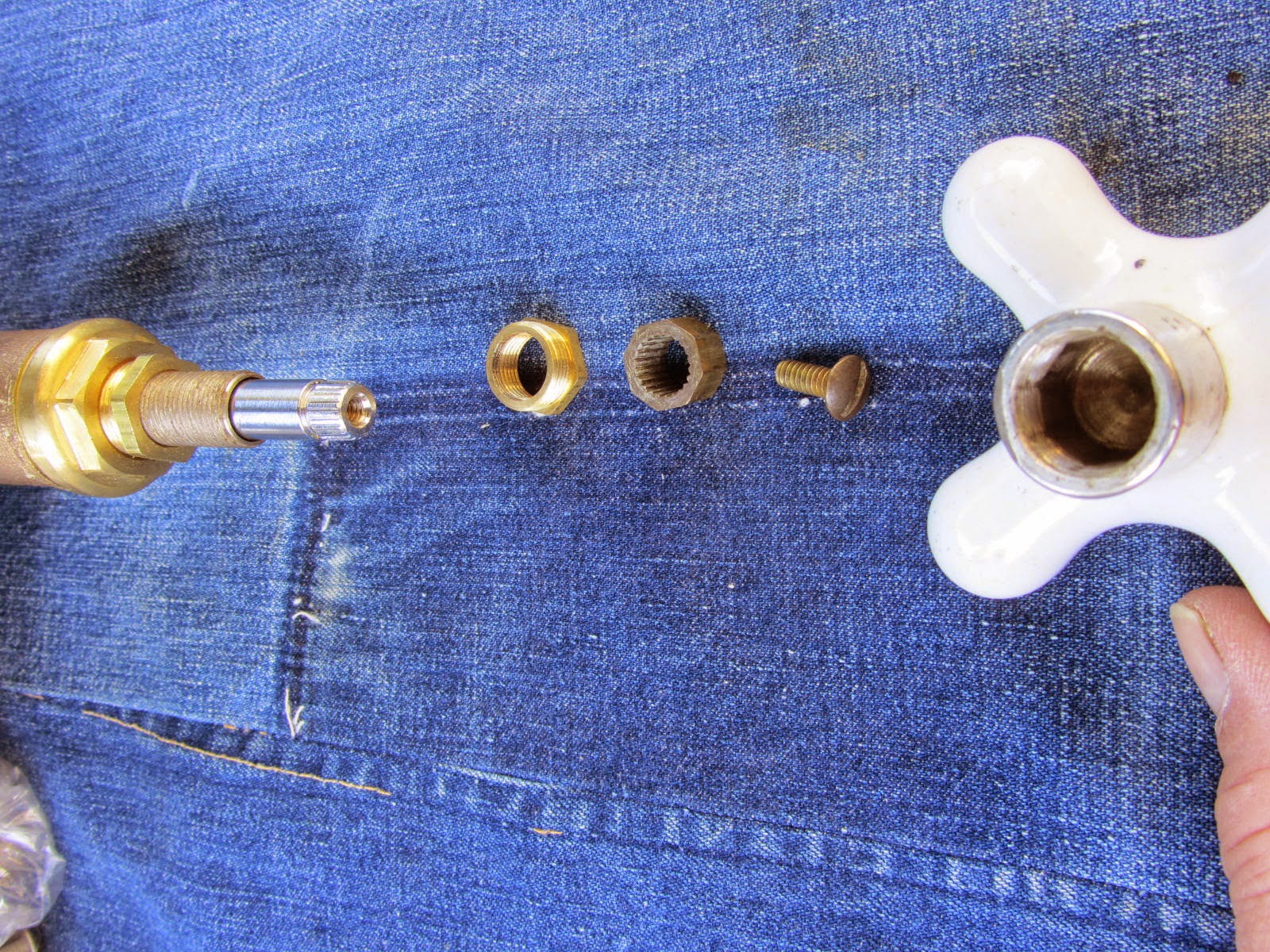 The problem of course is that the small parts tend to get separated from the large parts over the decades and once on their own it is far from obvious what they are and where they go. I had to provide four counter nuts, or lock-nuts if you prefer, and I only had one. One is a lot better than none at all as I have something to emulate when I have one. During my obligatory fruitless search for factory original parts I discussed my project and quest with colleagues wherever I went. One fellow suggested I use brass flair nuts to fill in. I gathered up my tools and headed off to Ace Hardware to look at the flair nuts. I had an ID-OD micrometer, my one original part, and my faucet seat gauge. I was using the faucet seat gauge to establish the size and thread pitch of the male threads of my nut. I threaded the nut into the seat gauge so as not to lose track of it, it is 5/8ths” and 24 or 27 threads per inch. Both of those are common faucet seat sizes and my mind was already moving toward, “What would I have to do to a 5/8ths X 27 thread faucet seat to use it as my nut?” At Ace the flair nuts were all wrong, mostly the threads were way too coarse and as soon as I saw this I felt as though I should have known that.

Driving back to the shop I was envisioning faucet seats, how I might get at least two opposing wrench flats onto them, and the hand filing or machining that  might be required for it.

I have to be careful in that moment. My inner vision when problem solving can get me into trouble. It is why I try not to park across the street from places where I work, going to and from the truck for parts I am aware that I can forget to be careful of traffic. In the same way my mental process can amount to distracted driving so I was only half thinking about my project.

In that moment though I had an epiphany and went home on a whole new track.  It had occurred to me, as I had conceived of ways to get my required wrench flats, that there is a part that has six wrench flats and a male thread, perhaps a fine male thread, and perhaps the size I needed if I could be that lucky. Arriving home I went to my containers of old new stock faucet stems and began to paw through them, searching. While most of them were late enough to be stem sealed with modern O-rings, a few were still using packings and those packings were contained and compressed with packing nuts. It wasn’t long before had a stem in my hand with a packing nut that was about the same diameter in the wrench flats as my sample, visually. 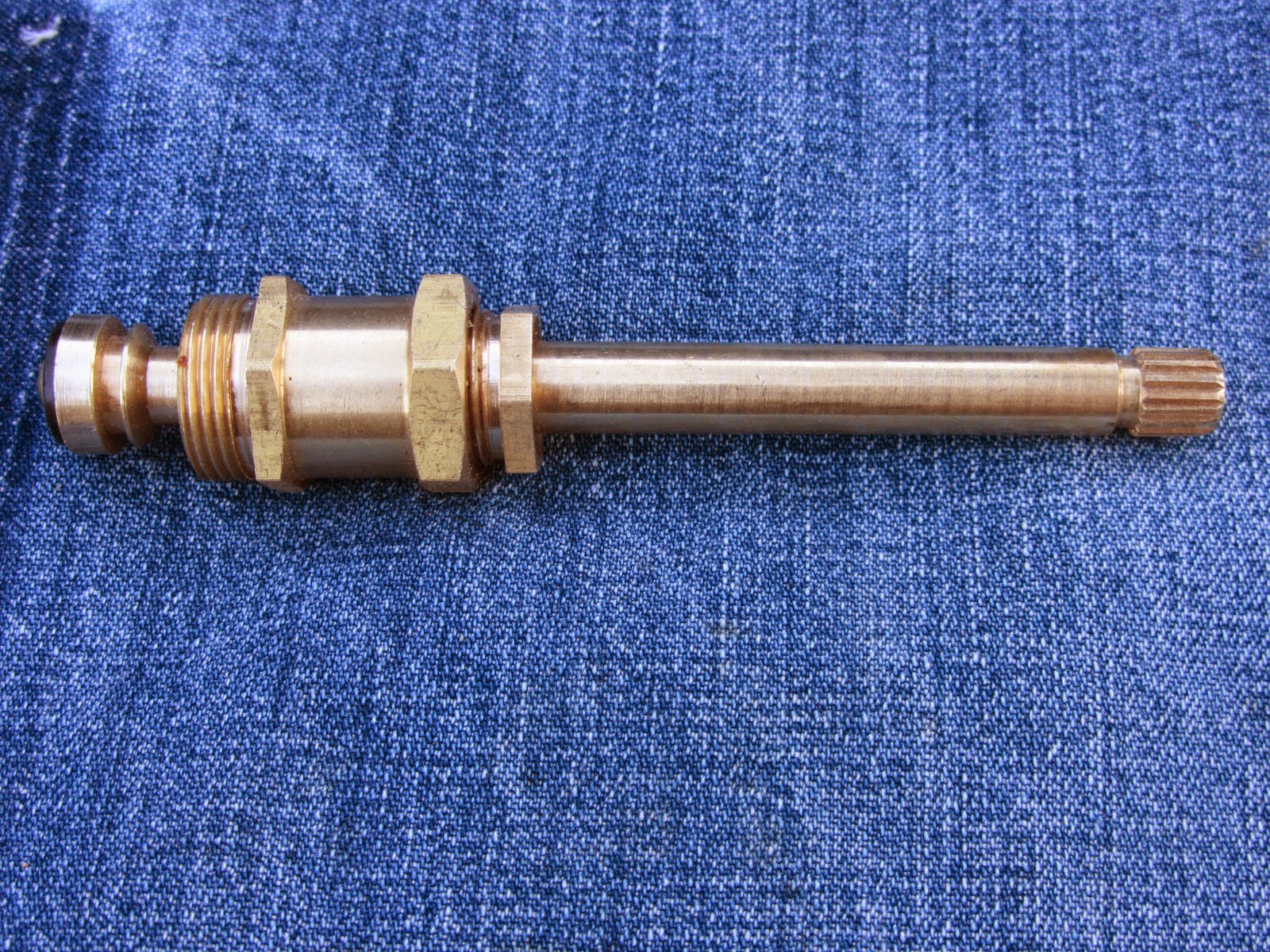 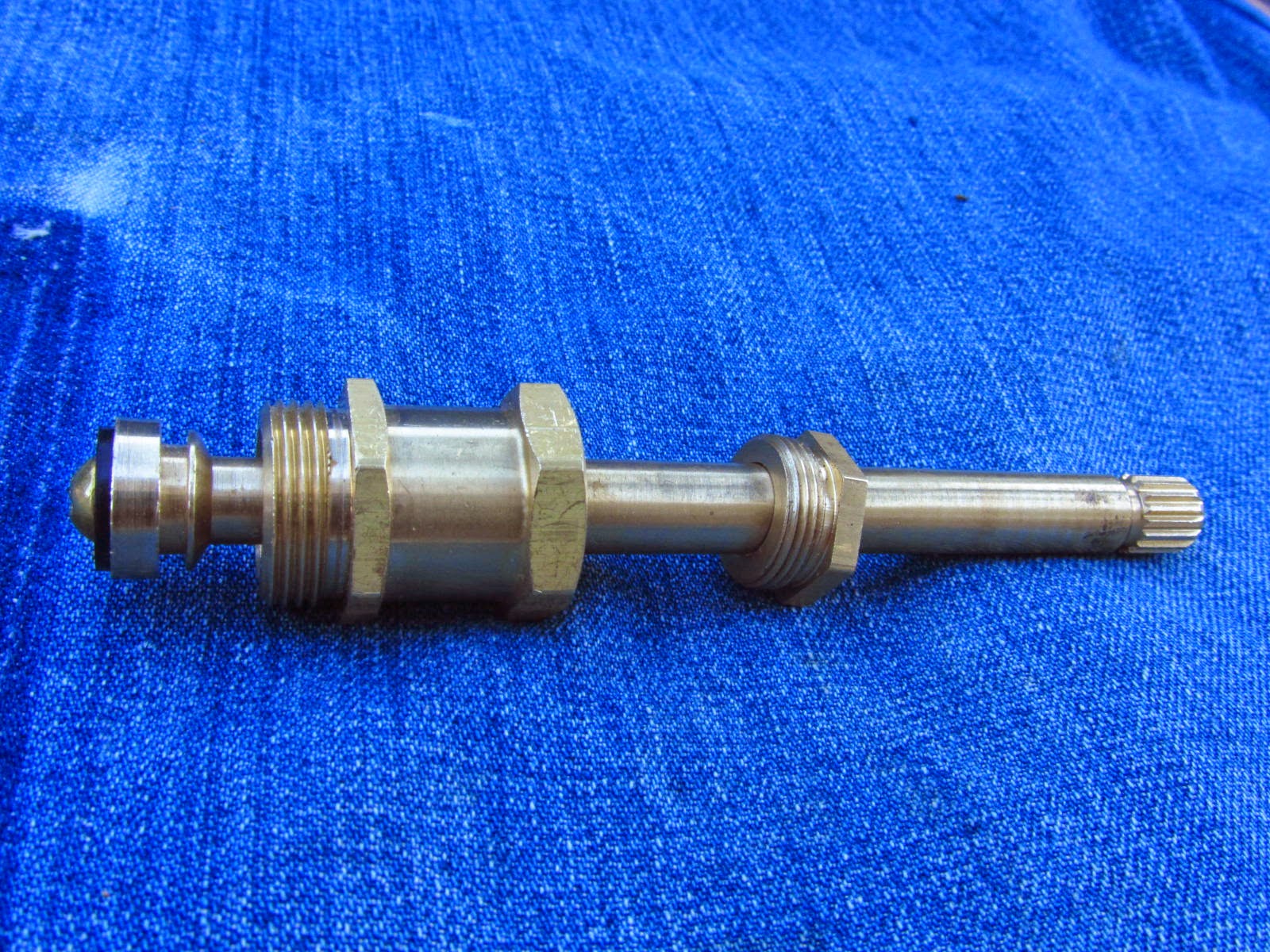 I slipped it from its place on the stem and tried it in the seat gauge. It was amazing! It had that same feel in the gauge. It threaded in but just loosely enough to go into both the 24 and 27 thread per inch holes without me being able to wiggle it in or out not turning it. It was a few turns longer than my original but I could lathe those off if I felt like it. I would definitely need to open up the ID but that seemed like nothing compared to sitting with a machinist trying to convey exactly what I needed in all of its parameters.
The rest was simple. I had to have a few more like stems from my supplier as I only had one. I drilled the first to my desired ID but without a purchase for the bit tip it was awkward so I used the lathe to do the rest of them. If I took the few extra thread off and had them polished and plated they would be indistinguishable from the original in anything but their new or old luster.
Not bad, not expensive, and easy to do again later. 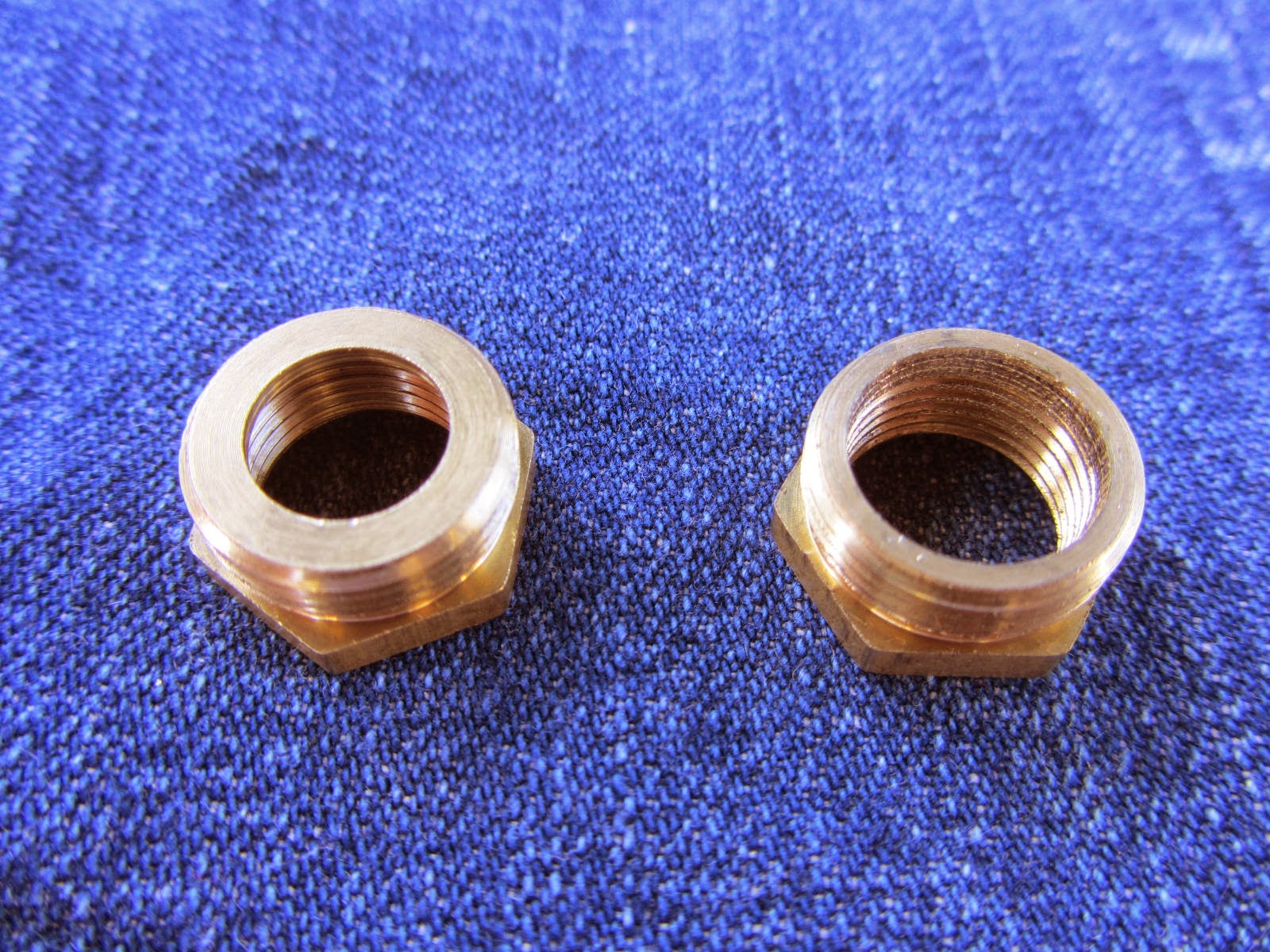 Details of photos:
Top, The assembled stem has the factory original nut.
The exploded view has my altered packing nut.

Third and forth photos show the donor stem with packing nut in place and then lose.

Fifth photo shows the before and after the small amount of machining I needed to do to alter the packing nut.

Last photo shows a better view of how the handle assembly works. 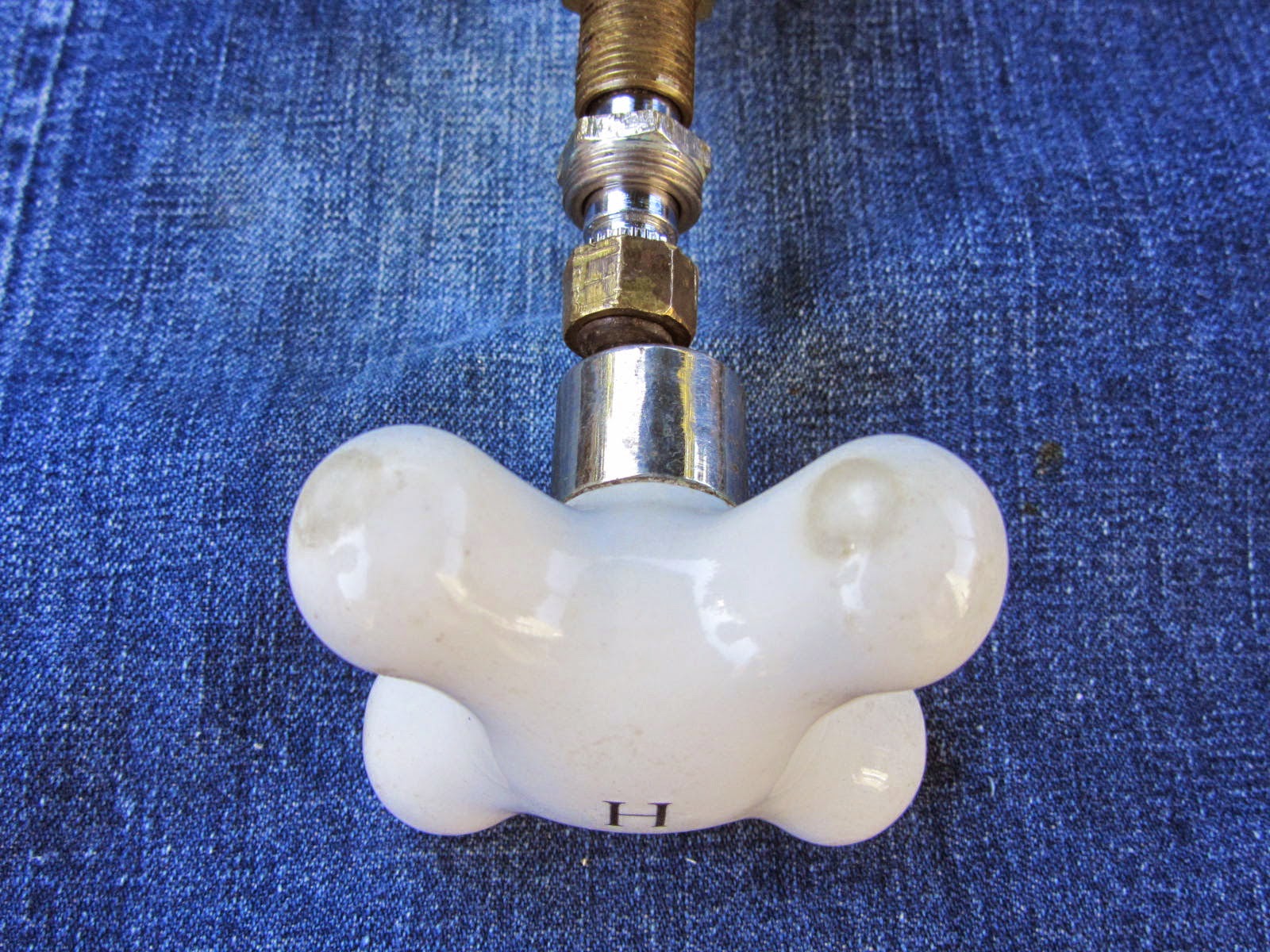 Posted by plumbinggeek at 8:02 PM